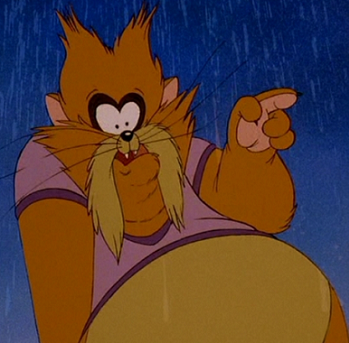 Feline buffoonery at its finest!
Advertisement:

Felines are typically associated with feminity, coolness, elegance, cuteness, arrogance and smug appearances, laziness, villainy and hostility, dignity, and grace, but a lot of male cartoon cats can be quite clownish or buffoonish instead. This trope is based on the fact that cats, especially tomcats (as females aren't a common choice for slapstick) are more often portrayed in cartoons/media as tough, cool, streetwise, clever, charming, crafty, cunning, belligerent or even mean, marginally buffoonish, typically clumsy, and/or oversexed than elegant, graceful, and dignified.

This can be considered partly a result of early cartoons heavily relying on Heroic Dog, and Nice Mice, thus making the cats the villainous fall guys to make the former look better. A Follow the Leader vibe from shows like Tom and Jerry or the Sylvester the Cat and Tweety Bird shorts are probably another influence with both cats being seen as the Western Animation feline equivalent of clowns. This trope could also be used to invert the behaviors of a typical cat and dog duo from shows like Ren & Stimpy being a prime example of how inverting a smart cat and dumb dog duo can be presented by instead presenting a smart dog (as Dogs Are Mean) paired with a stupid cat (being the Cats Are Dumb) being the exception personality-wise, or this trope would just show how making a feline character the more foolish, comical or goofier one when around other characters, group(s) of cats or the scenario of a show, short or film can be done humorously.

Sometimes this trope can be also used for rooting for a cat in a show with talking mice, they have to be less of a predator than the other cats. So it's really a case of Designated Villain/Defector from Decadence. And other times, this trope is used for presenting cats as playful, foolish, and humorously exaggerated characters. For instance, these cats may be drawn with big, bulbous, clownlike noses that are often red in color or are given silly voices and with the comedic dialog to enhance how goofy and humorous they can be.

There was a period in animation history when cats were the generic fall-guy animal and having a clownish bad guy with this trope in cartoons when some cats can also go hand & hand with being irritable, villainous or just comically mean-spirited cats at the same time, although it is starting to become a Dead Horse Trope now when there are some buffoonish cats that are later on depicted as friendly to be around, and also pleasant or even kindhearted in a goofy way because of how they can be portrayed as the cat being rooted for as the protagonist or are less of a predator.

This trope can apply to any species of cat, including tigers, lions, but this exceptional trope usually applies to housecats. Leonine examples are often portrayed this way to subvert or play with their regal, noble image.

Contrast Cool Cat and Cats Are Superior for obvious reasons. Relating to Men Are Generic, Women Are Special, Women Are Wiser, and Men Are Uncultured. Also compare and contrast with Cats Are Lazy (Where cats can be portrayed as dumb when lazy, yet those kinds of cats that are portrayed as common, everyday cats being listless rather than being goofy, comedy-based cats like the buffoonish ones are.)