Literature / Not Quite Human 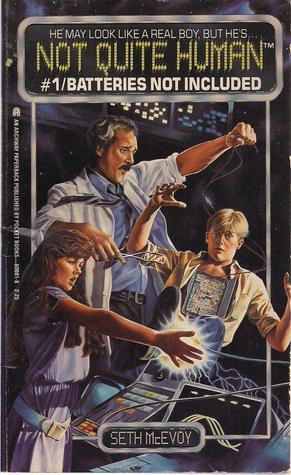 The actual story is as cheesy as this cover.
Advertisement:

Not Quite Human is a Sci-Fi series with elements of Slice of Life, Mystery and Comedy, written by Seth McEvoy. It consists of 6 novels:

C-13 is an android, in the classic sense of the term. A robot designed to look and act completely human; in this case, like an ordinary 13-year-old boy. His inventor, Dr. Carson, gives C-13 the name "Chip" and sends him to middle school to test him out. To keep an eye on Chip, Dr. Carson is working at the school as a science teacher, and his daughter Becky is attending one grade below Chip. Dr. Carson's ultimate goal is to prove to society that androids can function just as well as humans can and are capable of coexisting alongside them peacefully.

Being an android, Chip goes beyond simply being a 420-pound fake human, and has a lot of built-in special features. Cameras in his eyes record his entire day so it can be reviewed later by Dr. Carson. A built-in radio lets him communicate remotely if need be. He can perfectly mimic any voice. And he's superhumanly strong — which he was programmed to hide — and superhumanly fast. He was also programmed to follow commands in a certain order: follow all orders by Dr. Carson, and then all orders by Becky, unless they clash with orders by Dr. Carson. Never harm a human being, except to protect Becky or Dr. Carson. And self-preservation, which includes hiding the fact that he is a robot, takes precedence over everything else.

It isn't long before Chip encounters tricky social situations at school, such as his first bully, a girl who has a crush on him, a group of kids who want him to join their band, and a number of situations he wasn't completely programmed well enough to handle. If that's not enough, various crimes are being committed in town, and every book has one mystery or problem that needs to be solved.

Much of the humor relates to Chip's mistakes in dealing with people and not understanding social situations, speaking very stereotypically robot-like and literal in response to questions, and the way he interacts with people. Chip's excessive literalness is sometimes misinterpreted as a dry sense of humor, but some people do find him very odd. And he has to be taught how to do things like lower his voice in response to people who whisper to him, laugh when other people around him are laughing, and so on. Even when taught these new social skills, Chip still misinterprets them.

There's also tension coming from interactions with characters such as Nails the bully, and Mr. Duckworth the jerk gym teacher, who has it out for Chip and is the first to blame him for the many crimes going on. And there's plenty of Slice of Life scenes regarding what it's like to live with a humanoid robot in the house who's attending school, and we see a lot of how Dr. Carson and Becky try to deal with the situations Chip gets into, and gradually help him to act more like a normal human. Chip is sometimes given new programming, such as being programmed to return compliments, that in some cases makes things worse instead of better.

There's also all manner of things that can go wrong with Chip, such as accidentally breaking some of his artificial skin that hides the electronics within (he's programmed to know to cover that up), or being affected by powerful electronic interference that causes him to go haywire. Plus, even Chip's logical attempts to follow the strict code of ethics built into him causes problems. For example, his order to always protect Dr. Carson almost results in him getting into a fight with a police officer who is arresting him.

Manages to avoid the stereotype of the "robot who wants to be human" that is so common in robot stories. Chip is very much a robot, doesn't actually have emotions, and his robotness and how it colors his interactions with normal people is in fact a major point of much of the story, driving much of both the plot and the comedy.