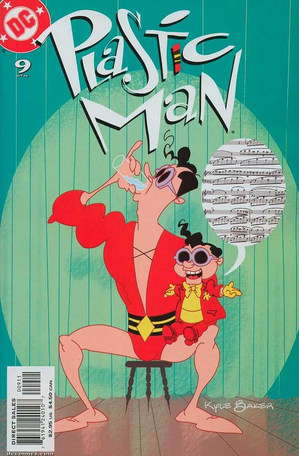 Wait, how is he doing that? Hold on, is that actually a dummy?
"Who're you callin' 'Dummy', Dummy?"
— Scarface, Batman
Advertisement:

A ventriloquist is someone who can "throw his voice", making it appear that it comes from somewhere else (in most cases, the mouth of his dummy), while his own mouth isn't moving. Sometimes they also can imitate voices, sometimes not. Some media acknowledge that it is very hard to pronounce some letters like 'b' that way (hence the "gottle of geer" joke), others don't care. In comedies, The Trickster character may use this to fool another character (preferably The Brute).

Ventriloquist dummies are often considered creepy due to their Uncanny Valley qualities ("automatonophobia" is the technical term for fear of one) and are often used in horror or horror parody. It's very common for there be a scene where the ventriloquist leaves the room and his dummy starts talking on its own.