Series / Two and a Half Men 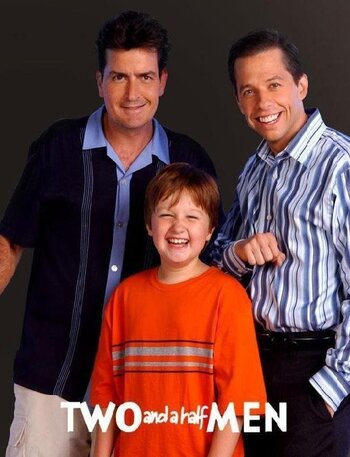 Ladies' man Charlie Harper (Charlie Sheen) is living the good life as a successful jingle writer in a seaside mansion in Los Angeles. That is, until his unlucky brother Alan (Jon Cryer), who was thrown out by his ex-wife, moves in, bringing his ten-year-old son Jake (Angus T. Jones). Now, not only does he have to cope with Rose (Melanie Lynskey), the stalker who lives next door, Evelyn (Holland Taylor), his conniving and guilt-tripping mother, and Berta (Conchata Ferrell), his sarcastic housekeeper, but also Alan's various neuroses and Jake completely lacking any sort of tact or personal hygiene. Unfortunately, however, Charlie's womanizing nature eventually catches up with him in 2011 when he catches a train the hard way. Enter suicidal billionaire Walden Schmidt (Ashton Kutcher) as the new owner of Charlie's home. After quickly becoming friends with Alan, he continues to let him and Jake live with him while they get over the loss of Charlie.

The show aired on CBS from September 22, 2003 to February 19, 2015. Season eight was cut short after lead actor Charlie Sheen was fired due to his self-destructive breakdown in 2011, one effect of which was a public feud with series creator Chuck Lorre. The show continued with Ashton Kutcher as Walden in the lead role. In the eleventh season, Angus T. Jones (who plays Jake) had his part changed to a recurring role due to college commitments, but did not appear onscreen again until his cameo in the series finale two years later.

Two and a Half Men provides examples of: