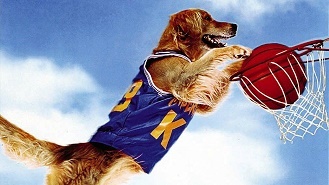 There's nothing in the rulebook that says we can't kill and eat your dog.
"Ain't no rule says a dog can't play soccer."
—Soccer Dog The Movie
Advertisement:

The underdog team brings in an adorable animal to play for them (often exploiting the fact that rules of the game do not explicitly forbid this) and wins the big game.

The classic setup: The new kid in town joins the local sports team populated by the Ragtag Bunch of Misfits. What they lack in skill, they make up for in Team Spirit, but on paper the next match looks hopeless. The Opposing Sports Team is in town and gunning for the championship. Their coach is a Drill Sergeant Nasty and the town bully is their star player.

Just then, the power of plot reveals that the new kid owns Tropey the Wonder Dog, an animal with astounding abilities which could make him a contender in this very sport! He petitions the team coach to try Tropey, where the dog's natural aptitude makes him an instant success. Come the night of the big game, out trots Tropey — the other team may rant and rave, but there's nothing they can do about it. Why? Ain't no specific rule agin' it! This is the Animal Athlete Loophole.

But in reality, such a move would be stymied by other rules. Age restrictions, for one: Try finding an arthritis-free dog large enough and old enough to play outside Little League Baseball. Then there are registration requirements: a legal name and school affiliation. Obeying the rules of play are a whole other issue: A dog is physically incapable of dribbling a basketball and there is no known ape or monkey other than humans with legs properly developed to kick a soccer ball. Most sports also have a broad rule against things that would bring the sport into disrepute, which is used to bar absurd shenanigans like these without having to make a rule against each one.

Still, family films aplenty adopt the premise and take it to the heartwarming if illogical conclusion.

Dogs and monkeys are usually the go-to animals for these kinds of film, but any size animal will fit through the loophole. A particularly rare but still notable inversion is a human applying to a sport that is not meant for one (at least on paper) and exploiting this loophole if asked.

Animal Athlete Loophole is a subtrope of Loophole Abuse. Overlaps with Artistic License – Sports. If the events of the plot cause someone to add a specific ban on Animal Athletes, it's an Obvious Rule Patch.