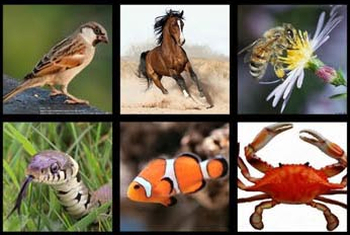 The animal kingdom: living proof that The World Is Just Awesome.
Advertisement:

You know, animals! Those living, moving, eating, breathing, biting, clawing, stinging things that are clearly not human (and are often darn proud of it).

These are tropes that somehow relate to animals, to characters who are animals and to their dealings with humans.

Only list tropes on this index if they do not already have an appropriate sub-index.

Also note that some tropes may qualify for more than one sub-index.

For tropes about the muppet named Animal, see here (or, if you can bear an all-capital Self-Demonstrating Article, then here).