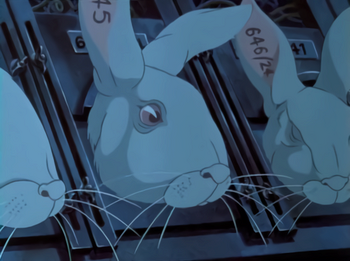 Best not to ask "What's up, doc?"...you may not like the answer.
Gerry: These cats in there are being smothered with lipstick just so that cosmetic firms can make money out of silly women.
"Nasty": I suppose you'd rather we tested the lipsticks on people. Would you like your wife's lips to be like that poor moggy's mouth in there?
Gerry: I don't want anyone's mouth to become like that: not my wife's, nor the cat's.
— Stray
Advertisement:

Animal testing is one of those sticky subjects that should never be brought up at dinner parties — unless you really like watching your guests squirm or devolve into rage-induced table flipping monsters. Some wholeheartedly support all animal testing as life saving progress, others wholeheartedly denounce it as cruel and barbaric. Still more are wildly uncomfortable with the practice itself but are forced to acknowledge that if it wasn't for (some) animal testing, many of the people we love would not be alive today making for one heck of a moral quandary.

On the other hand, many dogs, cats, rats and other creatures have suffered tremendously and died because of animal experimentation (sometimes for trivial reasons) when there may be better scientific alternatives

. Most modern laboratories and institutions establish an Institutional Animal Care and Use Committee

to ensure that all animal testing is done responsibly and with a minimum number of animals used to gather good scientific data.

The media, however, favor the Black-and-White Morality, so don't expect to see too many shades of grey (it's worth mentioning that they do exist however — see the third group of examples).

The actual term can cover a number of things, which raise different dilemmas... and different levels of controversy. Behavioral experiments, like that of rats in mazes or Pavlov's dog

don't tend to raise too many hackles unless physical or psychological trauma is involved (i.e. raising a baby animal in total isolation to see how its development is affected). Cutting animals open while still alive (vivisection) usually turns up in Free the Frogs plots and sci-fi/horror films, usually involving a degree of moral dilemma. Medical testing (using animals to test new drugs and procedures in order to benefit human patients) is probably the most contested minefield, with both staunch supporters and equally determined detractors. Cosmetic testing (using animals to test lipstick, shampoo, mascara etc.) rarely turns up in the media, unless the scientist is a villain in an animal-centric show. If it does show up, it is almost always exaggerated and even sometimes Played for Laughs, especially since using animals for cosmetics testing is falling out of favor — cultured human cell lines are turning out to be much more useful and better for PR.

The portrayal of animal testing in fiction strongly depends on a number of factors: Humans Are the Real Monsters vs. Humans Are Special, Science Is Good vs. Science Is Bad, and the show's place in the Sliding Scale of Idealism Versus Cynicism.

Shows that are pro-animal testing, usually because of an adult/pragmatic/scientific slant to the story, will feature hard-working and crusading scientists on the search for a cure for cancer, hampered by the Animal Wrongs Group. Usually turns up in crime shows, science fiction and occasionally drama.

Children's shows, or those with a heavy handed or justified animal rights/welfare message to get across, use a different tactic.

Some children's shows use scientists as insane or even as the Big Bad to show how evil animal testing is. The scientists will be either totally unconcerned about the animals' welfare or actively revel in tormenting their test subjects. However, those aimed at a more "grown-up" audience realize that this isn't exactly credible. Instead, they will show the world of vivisection through the animals' eyes — they don't know what's going on, they don't think "oh well, at least the humans will get some good out of this" — all they know is that they're in pain.

It's pretty obvious that even in fiction, there are no easy answers. For a start, whichever side of the debate that the show/book/comic falls in, it will probably caricature the other side - either scientists are evil animal killers who will do anything For Science!, or anyone who has anything to do with animal rights is a misinformed and fanatical vigilante or a A Nazi by Any Other Name. It would be extremely unusual for a scientist and an animal rights person to sit down and have a civil conversation about their differing points of view (for a start, it makes for pretty bad drama).

Back in reality, this is a very, very complicated subject. No matter what your stance on it is, be prepared for someone to disagree with you. Whichever side of the debate you fall on, though, the squeamish and nightmare-prone should probably avoid the examples...

See also Animal Wrongs Group, Science Is Bad, and Bad People Abuse Animals for in-universe negative connotations towards this. See Tested on Humans for the much maligned third option.

The Garfield we know is on his eighth life. In one of the bleakest moments of the franchise, we find that his seventh traumatized him, and the art style changes to make it clear just how real things have gotten. The segment only gets darker from here.

The Garfield we know is on his eighth life. In one of the bleakest moments of the franchise, we find that his seventh traumatized him, and the art style changes to make it clear just how real things have gotten. The segment only gets darker from here.