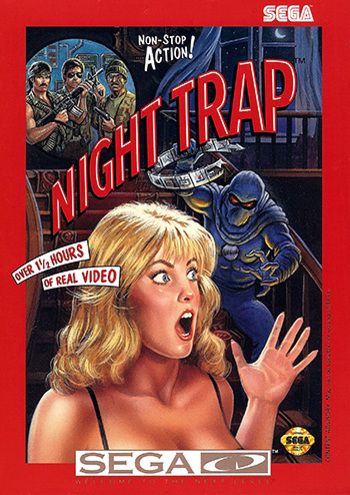 "Night Trap! Watch out behind you!"
Use the traps, Control!
Advertisement:

Night Trap is a Full Motion Video game by Digital Pictures. It was created (well, filmed) in 1987 and was originally intended to be released on Hasbro's videotape-based game console, the NEMO. However, the NEMO was never released, and the game debuted in 1992 on the Sega CD. In 1994, it arrived on the Sega 32X, Panasonic 3DO Interactive Multiplayer, IBM Personal Computer, and Apple Macintosh. To celebrate its 25th anniversary, it was released on PlayStation 4 and Steam on August 15, 2017 (with the Xbox One version set to be released at a later time), complete with a limited physical run which mimics the Sega CD box art; this version includes the prototype game Scene of the Crime which led into Night Trap's development. These rereleases were handled by VFX company Flash Film Works, current owners of the Digital Pictures game library and Screaming Villains.

You are a member of a special task force (S.C.A.T.: Sega/Special Control Attack Team) currently investigating a missing persons case. A number of teenage students have mysteriously vanished after entering a suburban lakeside winery house belonging to the Martin family. The Martins claim that the girls left safely, and refuse to allow the police to search the property. However, a reconnaissance by S.C.A.T. uncovers an elaborate security system with almost every room equipped with cameras and booby traps designed to capture intruders.

An undercover S.C.A.T. agent named Kelly Medd (played by Dana Plato) has managed to infiltrate the house by arranging a sleepover with the Martins' teenage daughter and four other friends. Furthermore, you have hacked into the security system and gained control over the house's cameras and traps. When the house is suddenly invaded by a band of black-clothed stalkers, it falls to you to use the traps and protect the girls while investigating the secret of the Martin household.

The game is mostly known for the undue controversy that it caused upon release: it is no exaggeration to call it the reason games have age classifications and content ratings. It has also made several "Worst Games Ever" lists (which is funny in hindsight, considering upon its release it received a fair amount of critical acclaim for its use of full-motion video and multiple-playthrough approach to gameplay). Due to this controversy, then-Nintendo of America Chairman declared that Night Trap would never appear on any Nintendo system; however, in April 2018 it was announced that the game would be coming to the Nintendo Switch in similar fashion to the PS4 release.

Some of the former staff who were involved in the game had suggested the possibility of a sequel in the future.

Followed by a Spiritual Successor titled Double Switch in 1993.