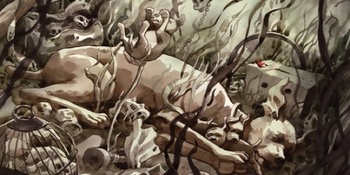 "My mother must have had decent human minders. They had let her give birth to us. They had not drowned us as so many people drown kittens; and, as I say, they left us in peace."
— Stray
Advertisement:

Your pet, who you may not have even known could get pregnant, has just had a litter of babies. You don't have the resources to take care of several tiny mouths and find them homes, so what's there to do? Why, drown them, of course!

It was relatively common to drown unwanted, usually young, pets. This has fallen out of practice in exchange for better pregnancy preventative measures (namely, spaying and neutering pets) and giving pets up to shelters if you can't home them, but the practice still persists in some more rural, poor or truly evil areas. There's a lot of Values Dissonance to this and it's usually Played for Drama or sadness. It might also be a Kick the Dog moment, a sign of Bad People Abuse Animals.

Saving a drowning pet is a convenient way to introduce a character. It might also lead to a friendship or Rescue Romance.

In some cases, surviving this is how a pet becomes A Pet into the Wild.