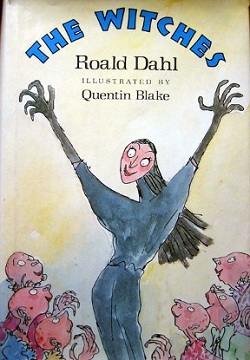 "For all you know, a witch might be living next door to you right now. Or she might be the woman with the bright eyes who sat opposite you on the bus this morning. She might be the lady with the dazzling smile who offered you a sweet from a white paper bag in the street before lunch. She might even — and this will make you jump — she might even be your lovely school-teacher who is reading these words to you at this very moment. Look at that teacher. Perhaps she is smiling at the absurdity of such a suggestion. Don't let that put you off. It could be part of her cleverness. I am not, of course, telling you for one second that your teacher actually is a witch. All I am saying is that she might be one. It is most unlikely. But — and here comes the big "but" — it is not impossible." note Unless, of course, your teacher's a man. But that never happens. Or, alternatively, unless you've seen her without gloves, moving in such a way that any wig would fall off, her nose up close without noticing a special ring or her retreating in disgust, her eyes up close without seeing a kaleidoscope, with her toes exposed, or coughing something up; given the range of factors, at least one is virtually guaranteed to be true.
Advertisement:

The Witches is a 1983 Roald Dahl book starting with an introductory chapter on the subject of Witches written in third person (presumably narrated by Dahl himself), but switches to first person for the rest of the story as the tale is taken up by an unnamed boy (called Luke in the film). He tells the story of how, after the death of his parents, he moves in with his Norwegian Grandmother who was once a great Witch hunter; she regales him with tales of Witches and their victims and how to tell the difference between a human woman and a Witch. They then are sent, on Doctor's orders, a British seaside holiday, as his Grandmother is too ill to return to Norway.

It is at a seaside hotel that the boy is trapped at the annual British Witch meeting and meets the hideous (but disguised) Grand High Witch. It is at this meeting he and another boy (Bruno Jenkins) are turned into talking mice by a magic potion. After escaping and returning to his Grandmother they hatch a plan to kill all the Witches in England and the Grand High Witch. With great courage he manages to spike the soup the Witches are eating (having posed as the phony child protection agency the RSPCC, and getting special treatment from the Hotel) with their own mouse potion which leads to them being killed (in the form of mice, obviously) by the Hotel Staff.

Afterwards, the boy and his grandmother find a possible lead to the locations of every known witch, and decide to use this knowledge (and the formula for the mouse potion) to spend the rest of their lives hunting down as many witches as they can.

The Witches, in a case of Our Monsters Are Different, are a specific species of demon and aren't human at all. They seemingly exist to hate children, and plan to destroy all the children in England in one fell swoop. They don't particularly kill adults... but if one dies anyway? "Vell then too bad for ze grown-up."

They have certain "tells" which a person can use, if they are eagle eyed and perceptive to spy a Witch:

open/close all folders
The Book
The Graphic Novel