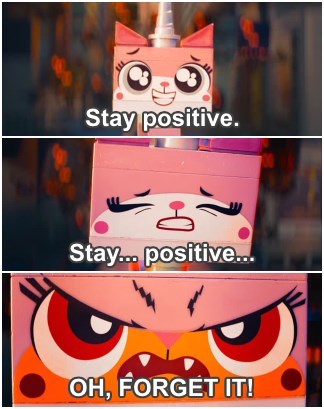 When anger needs a "contents under pressure" label.
"Deep in the recesses of my brain, a tiny red-hot flame began to grow. Something had happened. A fuse blew, and I had gone out of my skull."
— Ralphie, A Christmas Story
Advertisement:

A character holds back anger until it can no longer be held back, and then the rage comes pouring through.

Sometimes characters have every reason to be angry, but they try to hold it back for various reasons. Sometimes, the reasons are selfish; sometimes, they are because they know it would be wrong to get angry or that blowing their top would have bad consequences (such as losing their job, getting arrested, or even getting themselves or others killed); and sometimes, the reason is just for the sake of appearances.

Eventually, there will be a last straw. It could range from a minor thing to out-and-out hitting the character's Berserk Button. But now, the flood of anger comes pouring out like water from a burst dam. It usually involves Unstoppable Rage but in some cases, it can even be Tranquil Fury. Some stories might even have this trigger a Heroic Second Wind. Also, if the character's Berserk Button is hit, this character might even be twice as berserk as usual.

A Sub-Trope of OOC Is Serious Business, You Wouldn't Like Me When I'm Angry!.

A Sister Trope to Trying Not to Cry (a tears breaking point), Beware the Nice Ones (characters who often try not to get angry).

Contrast Hair-Trigger Temper (who never bothers trying to hold back), The Stoic (who almost never gets pissed in the first place) and Passive-Aggressive Kombat (a way to avoid open fights, while still being hostile).