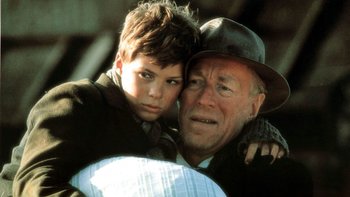 It's as depressing as it looks.
Advertisement:

Pelle the Conqueror is a 1987 film, made as a co-production between Denmark and Sweden. It was directed by Bille August and stars Max von Sydow. Based on the 1910 novel of the same name by Danish writer Martin Andersen Nexø, the film covers the first part of the novel which describes the titular character's childhood.

The film is set sometime around the middle of the 19th century. Lasse Karlsson (von Sydow) is a widower, a man of around 60 years old with a young son, Pelle. The story opens with Lasse and Pelle emigrating to Denmark from Sweden in search of work. Lasse struggles to find work, being a man of advanced age with a small son in tow, but manages to get hired as a farm laborer on the Kongstrup farm. The farm proves to be a brutal, unpleasant place, with both Lasse and Pelle receiving harassment because they are foreigners. The father and son struggle to survive in a harsh and unwelcoming land.