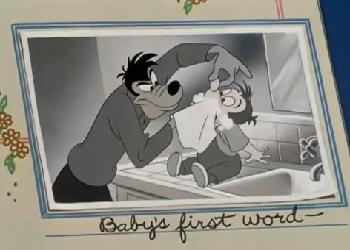 Another victim of Soap Poisoning?
Ralphie as Adult: (narrating) Over the years, I got to be quite a connoisseur of soap. My personal preference was for Lux, but I found Palmolive had a nice, piquant after-dinner flavor - heady, but with just a touch of mellow smoothness. (long pause) Lifebuoy, on the other hand...
Ralphie: YECCHH!
— A Christmas Story
Advertisement:

A common punishment, mostly for children after they have said a dirty word or been caught telling lies, is to get their mouth washed out with soap. This often indicates a very conservative family, or a child who has been neglected and not taught "proper" language.

Starting to become Values Dissonance to some folks in Real Life as of late due to the fact it can be dangerous (although it used to be Truth in Television), but mostly always Played for Laughs in movies, television, etc.

Stimpy Gets the Soap

Puberty's really done a number on this eediot.

Alternative Title(s): Wash Your Mouth Out With Soap

Stimpy Gets the Soap

Puberty's really done a number on this eediot.