Fanfic / No Such Luck, No Such Love 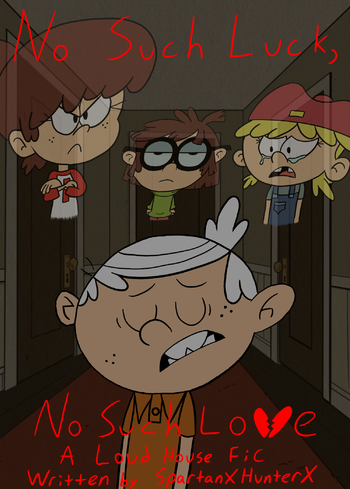 by KToonz on DeviantArt
Advertisement:

No Such Luck, No Such Love is a The Loud House fanfic written by SpartanXHunterX

which can be read here

It centers around an Alternate Timeline involving the events of the infamous episode "No Such Luck", where the Loud family thought that Lincoln was bad luck... except in this story, the family never believed that he was bad luck in the first place. They knew that Lincoln lied about it so that he could get out of going to his sisters' events, so they banned him from attending activities that he enjoyed, sold his furniture, and locked him outside the house at night just to teach him a lesson about lying.

When Lincoln is allowed to come back inside the house, he begins to realize that all of the times that he was blamed or was subjected to being a Butt-Monkey, it always involved his sisters in some way, which usually results in the girls getting away with their behavior while Lincoln gets thrown under the bus. He decides to stay away from his sisters in hopes that nothing bad happens to him by refusing to interact with them at any given moment, which greatly concerns the Loud family. However, Lincoln will eventually have to give his sisters a chance at redeeming themselves. Will the girls realize that they have been treating Lincoln horribly and make things right, or will he come to resent them for good?

As of 28/5/20, the fic has officially been declared as discontinued due to the author not having any motivation to work on it anymore.

who rebooted the story as No Such Luck No Such Love: Paradise Lost

No Such Luck, No Such Love provides examples of: