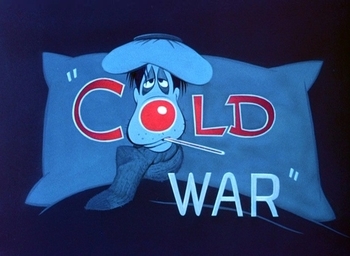 There's a joke about the Red Scare in here somewhere.
"One day Arthur decided he didn't like his nose.
He had a cold and his nose was red.
His sister thought his nose looked funny."
— Arthur's Nose
Advertisement:

It isn't always easy to tell when someone is sick in real life. Lots of illnesses tend to affect the inside more than the outside.

In media, however, you'll know when someone is sick just by looking at their nose. If they are sick, their nose (and less often, their cheeks as well) will be bright red, to show the audience that they're sick. It's commonly seen alongside Bedhead-itis.

This is rarely Truth in Television. Only a few specific conditions (such as skin rashes or irritation from frequent congestion-induced nose-blowing) specifically cause redness of the nose. As stated above, most illnesses are not totally obvious. However, its omnipresence in media has led to the misconception where all illnesses cause red noses. That being said, more localized redness elsewhere on the body is a relatively common sign of disease, being one of the five cardinal signs of inflammation.

Compare Luminescent Blush, which is caused by embarrassment rather than illness, Green Around the Gills, which is specific to nausea, and Polka-Dot Disease, another type of fictional disease that's easy to spot. See also Drunken Glow, where alcohol instead of illness is the cause of the redness.

Dennis's father has a cold, and his nose is red.

Dennis's father has a cold, and his nose is red.