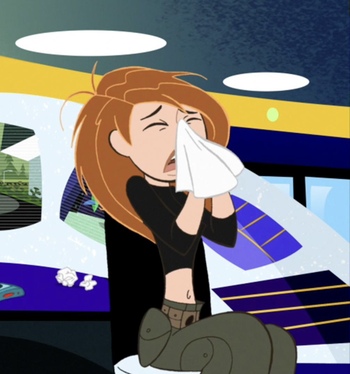 Being sick is a real energy drainer. Anything from the smallest sniffle to the harshest flu will suck the mojo right out of you, and you won't feel like doing anything, including brushing your hair.

That's where this trope comes into play. Bedhead-itis refers to when a character in media has messy hair when they are sick, as a visual indicator of how messy they feel on the inside.

Subtrope of Messy Hair. Compare Expressive Hair (where hair changes based on general emotions), Bad Hair Day (where this trope is not connected to illness), Illness Blanket (where a blanket is used as a visual indicator of illness), and Sickness Equals Redness (where a red nose/cheeks indicate illness). No relation to Alt Itis or Something Itis.