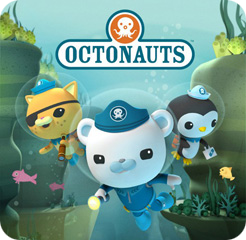 Octonauts is a British-American children's television series, produced by Silvergate Media for Cbeebies and animated by Brown Bag Films and Rainmaker Entertainment. The TV series is based on the children's books written by Vicki Wong and Michael C. Murphy of Meomi Design Inc. In the United States, it aired on Disney Junior until 2016. It is now exclusive to Netflix there.

Octonauts follows an underwater exploring crew made up of stylized anthropomorphic animals, a team of eight adventurers who live in an undersea base, the Octopod, from where they go on undersea adventures with the help of a fleet of aquatic vehicles. The subject matter is reminiscent of a blend of Star Trek, Thunderbirds and Jacques Cousteau. Although it is science fiction as regards to its technology, the exotic creatures and locations that the crew encounter are real marine animals in their natural habitats.

The show went on hiatus in 2016 after 4 seasons but was later renewed and a 5th season is confirmed to begin airing sometime in 2021. On August 14, 2020, Netflix released a feature-length movie for the series, Octonauts & the Caves of Sac Actun. A second, Octonauts & the Great Barrier Reef, was released on October 13, 2020, and a third, Octonauts & the Ring of Fire, was released on January 8th, 2021 in China and worldwide on March 30th, 2021. In September of 2021, Netflix launched a new season of episodes for the series, called Octonauts: Above & Beyond.

A chibi card in the style of the original books.

A chibi card in the style of the original books.