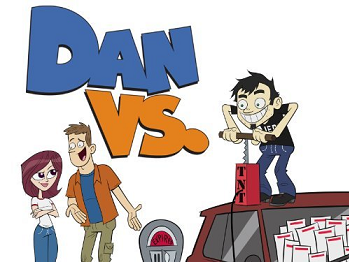 Dan Vs. is an animated comedy series produced by Film Roman and Starz that premiered on The Hub on January 1, 2011, and the first original animated show on that network not based on an existing property. It focuses on a Comedic Sociopath named Dan, who has it ingrained in his mind that every negative thing that remotely happens in his life is the fault of some random unseen force, from the entire country of Canada to the Wolf Man. His daily misadventures stem from his desire to provide swift retribution on whatever supposedly caused his problem, much to the chagrin of his best friend Chris. Hilarity Ensues. The show was very surprisingly well-received and considered, alongside My Little Pony: Friendship Is Magic, Transformers: Prime, Family Game Night and The Haunting Hour, to be one of The Hub's flagship shows.

Perhaps the best way to describe the show comes from this Internet quote: "It's... like some inversion of My Name Is Earl." Indeed, it features a lot of the same sort of humor and characterization as Earl, only with more cartoonish absurdity and less adult humor (but still some, mainly in the form of Black Comedy).

Though somewhat unknown, reception was largely positive, receiving an Emmy Award for "Outstanding Directing in an Animated Program" in 2013. Previously only on streaming services as "free with ads", the entire series was made available on Prime Video in December 2020note (and then pulled without notice a few months later). The entire series can also be watched for free on Tubi.

A flash game called Dan Vs. This Game was released in Nov 23, 2011 and is used to be played on the now defunct hubworld.com.

that there are plans for a revival aimed more towards adults. There's now a public campaign to garner fan interest in hopes that a streaming service will take notice and pick up the show.

Now has a Recap page, and a Best Episode crowner

Since so many examples of tropes have been gathered, the main page was split in half.

Example of:
Once per Episode