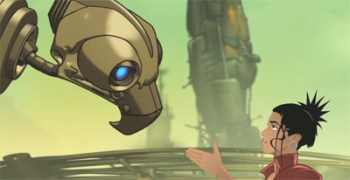 Be kind to your gold-eating metallic birdies.
Advertisement:

The one animated in Flash!

Set somewhere between the events of "Gridlock" and "Utopia".

Hey, we haven't had a good Gotta Catch 'Em All serial in a while, have we? Must be time to hunt the wild Plot Coupon.

An alien named Baltazar wants to conquer Earth; the Doctor and Martha thwart his plans and send him to the icy prison planet Volag-Noc; he swears vengeance.

Some years later. Martha is surprised to run into Baltazar's pet mechanical bird, Caw, whom they had freed when they sent Baltazar packing. Caw remembers Martha, thanks her for his freedom, and gives her a little metal brooch... and a quest.

First stop: an oil rig on an unpleasant-looking planet. The rig is being robbed by Sky Pirates, whose Captain, Kaliko thinks that the Doctor and Martha are spies from the oil company, and is all ready to make them Walk the Plank when the real spy — her first mate — reveals himself. Bad Guys Do the Dirty Work ensues. The pirate ship is broken up; Kaliko escapes in an escape-pod-thingy, but turns up dead next to the TARDIS. Still wearing her datachip-shaped pendant, fortunately.

Next up is the planet of the frog peole. Well, planet of the frog person: Ulysees Meregrass, an Anuran war consultant; and his clients, a hive of giant alien aphids. Meregrass also has datachip-shaped jewelry, so the Doctor and Martha stick close to him while he strategizes with the hive queen about their war against... humans, who also live on the planet. And who, it turns out, were there first, and were attacked by the aphids, and are the good guys for a change. The Doctor brings about peace by posing as a pirate leader, Doctor Vile, of the Mantasphid, in a bit of over-the-top voice work from David Tennant.

Last datachip. Why, it's on the icy prison planet of Volag-Noc! What are the odds? The Doctor forgot his get-out-of-jail-free card, though, and finds that the galactic statute of limitations hasn't quite run out on some of his more notorious doings. His stay will be somewhat longer than planned.... unless, of course, he MacGyvers his way out.

Turns out Baltazar had played the Doctor for an Unwitting Pawn. He takes the final datachip, takes Martha hostage, and takes off for The Infinite. The Doctor catches up with them—though he later says it's been three years in his timeline—just in time to save Martha from the illusion of her heart's desire (a hologram of himself), but not able to save Baltazar from his (a hologram of piles o' treasure).

This was initially shown in serialised form as a regular feature in the BBC's children's Bonus Material show Totally Doctor Who, and later broadcast as an omnibus. Can be watched here