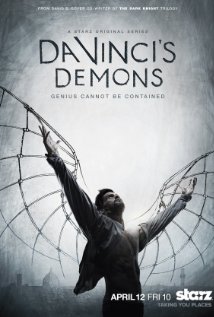 Da Vinci's Demons is a TV series about Leonardo da Vinci's fictional early life as an artist, inventor, idealist, and a genius intellectual, which premiered on Fox and Starz networks. It was written by David S. Goyer (who collaborated with Christopher Nolan on The Dark Knight Trilogy), and it stars Tom Riley. The story is mostly realistic, drawing from historical events and showcasing real-life historical figures, but it also contains a Low Fantasy Myth Arc that involves a search for a MacGuffin called 'The Book of Leaves'. This single volume contains hidden knowledge about the universe, and one's possession of it can radically alter the political power-field. Most people are unaware of this book, and those who do know of it generally have ties to the Vatican or The Sons of Mithras

, an ancient cult that is dedicated to the pursuit of the book.

Meanwhile, Da Vinci serves as the war engineer to the Medicis, making weapons for Lorenzo the Magnificent, and becomes caught up in the political intrigue surrounding Florentine nobility, which is in the middle of a conflict with Rome. The Medicis appreciate Leo's genius, but his unorthodox methods, and general nonchalant attitude, often put them in troublesome situations.

It now has a character page, which could use some love. All character tropes should be moved there.