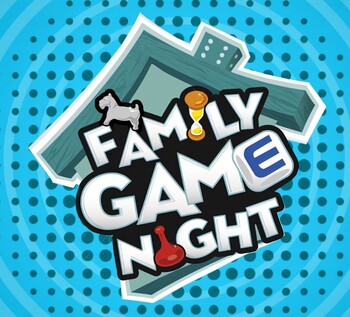 Family Game Show aired by The Hub which was supposed to be the network's flagship program note (because absolutely no one expected My Little Pony: Friendship Is Magic to become the face of the network, so much so that they snuck an episode of this show onto the "Adventures in Ponyville" DVD as a bonus feature). In this show, families compete in adaptations of Hasbro board games (which makes sense, given who owned 40% stake in the channel) to try and earn a chance at cash and prizes.

Games featured on the show include:

For Seasons 1-2, two families competed per episode, and "Crazy Cash Cards" were earned for each victory. At the end of the show, they were inserted into a Crazy Cash Machine to reveal their values and spit out a bunch of Monopoly money. While most were worth from $100 to $995 (in $5 increments), at least one was worth between $1,000 and $5,000. But one card out of those 21 was the Top Cash Card, which if inserted would break the Ba—er, award an amount from $7,500 to $25,000. Both teams kept all cash and prizes, but the team with more money got a bonus vacation.

Season 3 changed up the format: families (one or two, depending on the game) are now called from the audience Price Is Right-style to play one of four games per episode for prizes. Each of the participating families (or the winner in two-team games) then choose a card containing a combination, hopefully containing the one that opens the Community Chest and allow them to advance to a revised Crazy Cash game for a chance to win a car. The same setup carried into season 4, with a few new games added into the rotation(including the first mini-game based on Monopoly).

Season 5 debuted in August 2014, looking the same as before, but now celebrities joined in the fun for a few games. Two months after it debuted, The Hub became Discovery Family, with Family Game Night being the only Hub game show to carry over to Discovery Family's lineup. A sixth season never materialized, however, likely owing to Discovery Family's slow death (outside of MLP, of course).