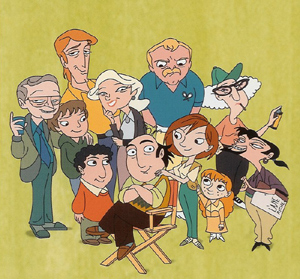 The Critic was a short-lived prime-time animated series that featured Jon Lovitz as the voice of the titular critic. It was created by Al Jean and Mike Reiss, who were also writers for The Simpsons. It was launched on ABC in 1994, where it was cancelled after a month, but brought back in the summer to air the rest of its 13 episodes. It was picked up by FOX the following year, where it ran for a 10-episode second season. UPN expressed an interest in picking up the series, but negotiations eventually broke down and a third season never materialized even though scripts had already been written for it. Ten short Flash cartoons (webisodes) appeared on the internet over 2000-01, and reruns of the series aired on Comedy Central for a time. In Latin America, this show was aired on Locomotion before turning into Animax.

Jay Sherman is New York's #3 film critic, with a cable television film review show called Coming Attractions. He delivers scathing reviews of nearly every movie featured on the show, which does nothing to boost his ratings or popularity. It also doesn't help that he's overweight, balding, cynical and incredibly unlucky with the ladies. His ex-wife Ardeth (not pictured) keeps demanding more alimony from him, and while he does score a few dates, the women he chooses are either insane or trying to get a positive review. His boss Duke Phillips thinks he's gay and keeps mistaking his statements for come-ons, and his elderly chain-smoking make-up lady Doris loves to inflict verbal abuse on him.

Jay is the adopted son of former New York governor Franklin Sherman and his wife Eleanor. Their butler Shackleford (not pictured) has a tendency to greet Jay as "Adopted Master Jay" whenever he sees him. Jay also does have a few friends: His best friend Jeremy Hawke (a combination of Paul Hogan and Mel Gibson); restaurant owner Vlada Veramirovich (well, he's nice to Jay's face, anyway); his teenage sister Margo; and his and Ardeth's son Marty, who attends United Nations High School (where one of his classmates is a Klingon, and another from Easter Island has a head made of stone).

In the second season, after FOX picked up the show, the character of Jay was retooled. He was given a rounder face, bigger eyes, a warmer personality and a long-term girlfriend in personal assistant Alice Tompkins. Like Jay, Alice has a child from her own failed marriage, her young daughter Penny.

The show was resurrected one last time as an Internet Flash series. The supporting characters from the TV series are gone (save for an appearance by Vlada), and Jay keeps hitting on his new and younger make-up girl Jennifer (not pictured). Most fans don't really count this as canon.

Not to be confused with Mel Brooks' first film or R.B. Sheridan's play

. Or The Nostalgia Critic.

Now has its own Character page and a Recap page.

This show uses the tropes:

But I have nowhere to go...

When Frank and Eleanor get on a rickety airplane, Frank decides to go into the cockpit to see if the pilot can fly smoother. Upon entering, he discovers the pilot is a penguin...who has been drinking. However, he then realizes outloud that penguins are unable to fly. The moment he says this, the plane nosedives into a crash.

Example of:
Puff of Logic

When Frank and Eleanor get on a rickety airplane, Frank decides to go into the cockpit to see if the pilot can fly smoother. Upon entering, he discovers the pilot is a penguin...who has been drinking. However, he then realizes outloud that penguins are unable to fly. The moment he says this, the plane nosedives into a crash.