But He Sounds Handsome 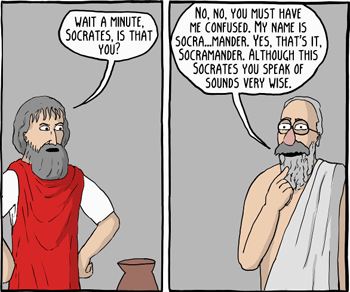 "Also in this house dwells Pseudolus, slave to the son. A role of enormous variety and nuance, and played by an actor of such versatility, such magnificent range, such... Let me put it this way: I play the part."
— Pseudolus, A Funny Thing Happened on the Way to the Forum
Advertisement:

Oh, hello there. Were you looking for the trope But He Sounds Handsome? Well, that's definitely not me. Sounds like a pretty great idea for a trope though!

If I were But He Sounds Handsome, I would be a trope about characters secretly complimenting themselves... while disguised as someone else. I might also be about giving compliments to a mysterious person (who would have been, of course, me), or hearing insults/compliments about my normal identity while in disguise. It's pretty much a stock gag/joke for anyone in disguise.

Often I... I mean But He Sounds Handsome would be used as part of a Paper-Thin Disguise.

The trope is frequently inverted by a character trying to deflect suspicion by insulting their other identity. What a dumb idea for a trope that is; I'm glad I'm not that trope. Or its inversion.

Hang on, he's actually telling me right now... yes? What is it? Oh, okay. He says this occasionally overlaps with the trope Holding Both Sides of the Conversation, where one person pretends to be two people at once. He also mentioned that it overlaps with Sock Puppet when the pretense uses a second Internet identity. It also applies to cases where a member of Group X in disguise defends Group X — a Sweet Polly Oliver objecting to an insult to women, for instance, or an undercover spy speaking up for his home country. At least, I'm sure that's what But He Sounds Handsome would say. What a great trope. However, I've heard — I'm not speaking from direct experience, of course — that But He Sounds Handsome is only slightly related to a common joke wherein a character makes a joke of complimenting his Doppelgänger, his Ridiculously Successful Future Self or his otherwise pathetic past self, his Identical Stranger, or just his plain ordinary identical twin for being remarkably handsome.

Kirito opens up to Leafa about his home life and how he is treated like absolute crap by his younger sister Suguha; while Leafa tries to defend her own self.

Kirito opens up to Leafa about his home life and how he is treated like absolute crap by his younger sister Suguha; while Leafa tries to defend her own self.