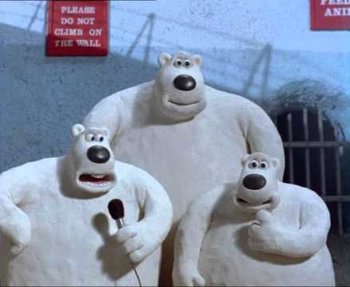 Creature Comforts is a British Stop Motion series created by Nick Park and Aardman Animations, of Wallace & Gromit fame. It originated as a five-minute short film made in 1989 as a twist on the man in the street style of interview. Here the "men" in the street were animated as animals using claymation. Members of the public were asked what they thought about the living conditions of animals in the zoo, and of their own living conditions and then animated as zoo animals, leading to some rather amusing juxtaposition between the lines and the situation.

The film proved popular and the Electricity Board employed Aardman to make adverts for them in a similar vein. Unfortunately most people remember them as the British Gas ads.

In 2003 multiple seasons of 10 minute programmes in the style of the original film were made and received a reasonable reception. Most of the comedy came from the careful choice of animal and location, leading to a philosophical amoeba talking about "how we are all just bags of water really" or an alligator praising her local neighbourhood (a sewer) and denying she had a damp problem.

The series also pokes fun at the way that people try and talk up to the microphone, trying to sound cleverer than they are or to speak in sound bites.

In 2007, an American version was produced for CBS, using American interviewees. Sadly, it barely got three episodes aired from its initial six-episode commitment before being canceled.

In 2020 a 2D animated short film that was co-produced between Aardman and The Born Free Foundation which was based on the series titled Creature Discomforts: Life In Lockdown.