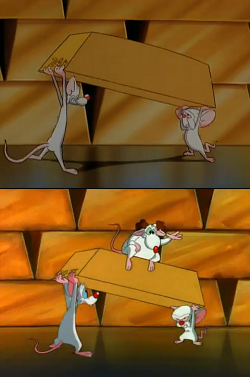 What do you mean, "Larry wasn't always in the show?"
Ada: You... knew each other?
The Dark Id (as Leon): Well, the script says I did, but hell if I've ever seen that guy before the cutscene just after the fight with Todd.
— The Dark Id's Let's Play of Resident Evil 4
Advertisement:

A previously unmentioned character who suddenly appears without notice and who we are told was really there all along but just... off-screen or something. It comes about because the writers want to introduce a new character, but don't want to come up with a complex introduction where everyone meets them and learns what they're like—it's just easier to pretend that everyone automatically knows them, and the relationship is ready-made. "Oh hey, that's my old rival!" "Oh, this is my brother/sister whom I've never told you about," etc.

In other words, this is a relative or a friend or even a rival whom we really should have met, or at least heard about before, since the other characters would have us believe they have been crewing the same starship, working on the same project or sitting on the other side of the same classroom for years.

This can work if the character (and the actor) proves compelling enough for the audience to suspend their disbelief, or that it's possible nobody mentioned them "on-camera" before (like if the show is set in a school, and the character is a casual acquaintance of the others but hasn't done anything significant to the plot until now). It's also possible if there's an in-story reason for the character to have been incognito (perhaps they were a spy, or an escaped convict), and the character was there in plain sight all along, but disguised as one of the show's many extras. Among the most clumsy versions is the "Long-Lost Daughter/Son". This trope can be especially disruptive if the new addition doesn't fit the tone of the series.

The subverted, Watsonian version of this is the Backstory Invader, when a newly-introduced character actually wasn't there before, but the characters are made to believe they were due to Fake Memories, Reality Warping, or a Cosmic Retcon. Can also be lampshaded in-story by having the new guy be part of a VERY large family, so even his relatives in the cast don't recognize him at first.

Related to (no pun intended) Long-Lost Uncle Aesop, but while the Long-Lost Uncle is usually a one-shot character to deliver An Aesop, Remember the New Guy is basically a new main character retconned out of thin air—in fact, the term "Retroactive Continuity" was originally coined to describe this trope.

If the character is going to be killed off straight away, this trope can be used to turn him into a Mauve Shirt beforehand.

Many crossovers set in the same universe frequently contain this as a method of bringing the cast of the two series together.

Compare Cain and Abel and Seth, Cousin Oliver and New Neighbours as the Plot Demands. Can often occur in combination with Suspiciously Similar Substitute, when an actor is no longer available and a new character is quickly brought in with minimal introduction to fill the role. Contrast Chuck Cunningham Syndrome, in which a character disappears with no explanation. When an adaptation takes steps to avert this, it's an Early-Bird Cameo. Also compare Unknown Rival, which can sometimes result in the opposite situation where the audience is familiar with a character, but the other characters aren't, even in situations where they really should be. Sometimes results from a character being given an Adaptational Late Appearance, when they were Adapted Out of their debut but show up later and are still treated like they've always been there.

Gary Gibbs is apparently Mike's arch-enemy despite never being seen or heard of.

Gary Gibbs is apparently Mike's arch-enemy despite never being seen or heard of.