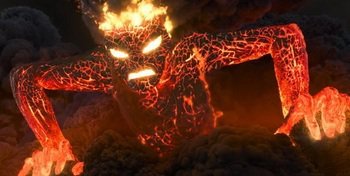 Te Ka, in all her molten, fiery glory.
Advertisement:

The Blob Monster is dangerous because of its amorphous, shifting nature allowing easy movement and smothering the opponent. The Rock Monster is dangerous because of its hardy physiology and weight allowing it to crush the opponent. So what if you tried to mix them both? Increase the rock's temperature by a thousand degrees until molten, give it a mind of its own, and you get Living Lava.

A creature made of lava, it has the strength of rock while being amorphous due to its molten state. More importantly, as lava is incredibly hot, it'll damage anyone who'd dare try to even get close to its molten body, assuming convection is in play. The Living Lava tends to dwell in the Lethal Lava Land and is vulnerable to rapid cooling. Sometimes they'll have more solid and hard body parts to better interact with the rest of the world.

While the Magma Man is about controlling lava, Living Lava is about beings made out of the stuff. A sub-trope of Lava Adds Awesome and Elemental Embodiment. Also a sub-trope of Silicon-Based Life, which usually deals with silicates in a solid state. Sister Trope of Evil Living Flames. For other living masses of inorganic matter, see Muck Monster, Rock Monster and Sentient Sands.

Necross was a former Guardian of the Sun who fell from grace and had the Sun taken from him. Now he wants to take the light away from the whole world.

Example of:
Dark Is Evil

Necross was a former Guardian of the Sun who fell from grace and had the Sun taken from him. Now he wants to take the light away from the whole world.