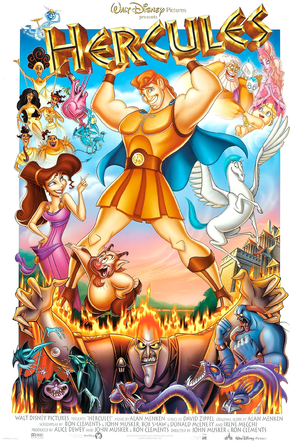 From Zero to Hero, just like that!
"I will find my way, I can go the distance..."
— Hercules
Advertisement:

Hercules is entry #35 of the Disney Animated Canon, released in 1997. Being a mostly lighthearted musical comedy that serves as a change of pace after Disney attempting three epic features, this film is a very loose, family friendly adaptation of the myth of Heracles, being to Greek Mythology what Aladdin was to the Arabian Nights.

After Zeus fights and sends the Titans to the Underworld, he becomes the ruler of Mount Olympus, home of all Greek gods. Hades is sent to rule the underworld, but he makes plans to throw Zeus out of Mount Olympus with the Titans' help. The three Fates warn him that his plans would be endangered if Hercules, Zeus and Hera's newborn child, is still around by the time he tries to take over Mount Olympus. Hades sends his minions Pain and Panic to turn Hercules into a mortal and kill him, but they fail in their attempt and leave him on earth with his divine strength to be raised as a human. Hercules grows up but later learns he is the son of Gods, and in order to return to Mt. Olympus he must turn into a "true hero".

While it may not have been Disney's most successful movie thanks to competition, it nonetheless made plenty of money and earned its fair share of praise and success when compared to the Disney franchise as a whole. Its sense of humour was compared to that which Robin Williams brought to Aladdin, showcasing a villain both competent and hilarious. Some mark it as the turning point where Disney no longer confined humour to incompetent sidekicks.

Over a year after its release, the film spawned a cartoon that ran both in syndication and on Disney's One Saturday Morning on ABC, from 1998 to 1999. It was a Midquel series that presented Herc's life in high school and had him hanging out with fellow Greek characters Icarus and Cassandra. It also presented a plot hole in that Hades was still trying to get him killed, despite the fact that in the movie he didn't know Herc was still alive until he was an adult, but the writers excused it to have some fun with the setting and characters, hoping that the plot hole wouldn't bother viewers too much. Thanks to James Woods coming back, it did pretty well.

A level based upon the movie's setting called Olympus Coliseum shows up in the Kingdom Hearts series... heavily. It has appeared in seven out of eight games, and even in the game it didn't appear in, the world's theme music was used in another world. Hades is also the most recurring Disney Villain in the series besides Maleficentnote the biggest Disney Villain of the series herself, probably because you can always rely on getting the big name of James Woods to play him. Even for Sora’s guest appearance in Super Smash Bros. Ultimate, which otherwise avoids referencing the Disney animation part of Kingdom Hearts as much as possible, the world is still loosely referenced during one of Sora’s Classic Mode matches.note Specifically, the battle with Cloud, which recreates the Kingdom Hearts I fight with him at Olympus Coliseum.

There was a stage musical

adaptation of the movie by the Public Theater in New York, and is notable for casting Roger Bart, the actor who provided Hercules' singing voice, as Hades.

A Live-Action Adaptation is in development, produced by The Russo Brothers.

"A star is born!"
Feedback

It Looks Better That Way

The real reason that the Venus de Milo has no arms.

We Were So Close!

It Looks Better That Way

The real reason that the Venus de Milo has no arms.

We Were So Close!