Western Animation / The Princess and the Frog 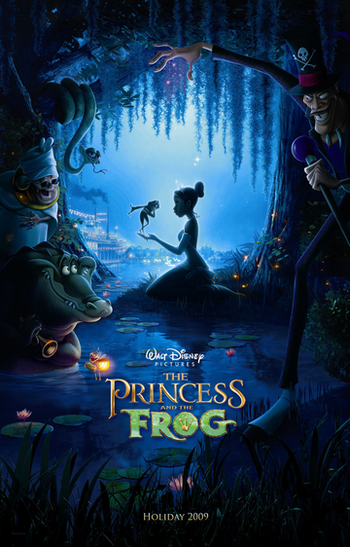 "♫ The evening star is shinin' bright.
So make a wish, and hold on tight.
There's magic in the air tonight,
And anything can happen... ♫"
—Tiana
Advertisement:

Released on December 11, 2009, The Princess and the Frog is the 49th animated feature of the Disney Animated Canon, as well as the first since 2004's Home on the Range to be traditionally animated, and the last 2D film to have original characters. It's inspired by the novel The Frog Princess, E. D. Baker's take on the classic fable "The Frog Prince," and written and directed by Disney staples John Musker and Ron Clements. It is also notable for introducing the first black and first American Disney Princess into the official line-up. note Not counting Pocahontas, who is "American" in the sense of "a native of North America" but not in the sense of "a citizen of the United States," which does not yet exist at the time that film takes place.

In 1920s New Orleans, 19-year old waitress Tiana struggles to earn money in order to create her own restaurant — a dream she and her dad shared before he passed away. Things seem to be turning around when the handsome prince Naveen comes to town, prompting Tiana's rich friend Charlotte to pay her lots of money if Tiana will cater at the party Charlotte throws for Naveen. Unfortunately, Charlotte is not the only one interested in the egocentric prince, as an evil voodoo sorcerer named Dr. Facilier manages to trick him into a Deal with the Devil and replaces the prince with his transformed manservant. Naveen is turned into a frog and requires a princess' kiss to lift the spell. Mistaking Tiana for a princess at Charlotte's costume party, he asks her to kiss him. Tiana, disillusioned because her attempt at getting the restaurant failed, reluctantly agrees to kiss Naveen if he pays for her restaurant, but there's a twist — since she's not a princess, the plan backfires and she's turned into a frog as well! As Tiana and Naveen have very different outlooks on life, they have a hard time cooperating, but they're forced to bond together and embark on a journey through the lush bayou of Louisiana to find the mystical Mama Odie who can lift their spell. While they are joined by Louis, an alligator jazz enthusiast, and a Cajun firefly named Ray, Dr. Facilier is hot on their trail, hellbent on using Naveen's blood for further nefarious purposes.

For almost a decade, Disney had been firmly entrenched in the growing 3D/CGI movement (not counting Direct to Video sequels); a Disney exec announced that Princess would be a long-overdue return to the animation tradition the company maintained for over fifty years. Randy Newman composed the songs for a film that harkens back to the age of Disney where music played as much a character as the actual cast members themselves. The film is also in large part a love letter to the city of New Orleans, a town even Walt Disney himself considered to be the most magical city in the world.

Following the release of this film, Tiana was added to the official Disney Princess lineup.

Before adding examples, note that tropes pertaining to the more sensitive political issues (gender and race) have been moved to the analysis page.

In June 2020, it was announced that the Disneyland and Walt Disney World versions of Splash Mountain would be re-themed to the film. While the official announcement came in the midst of renewed calls to change the attraction after waves of international Black Lives Matter protests and greater awareness of racially problematic material (especially considering the ride was based on such a problematic film, 1946's Song of the South), the retheming itself was already in development for a year by that point and was delayed because of the COVID-19 Pandemic.

During Disney's Investor Day on December 10, 2020, it was announced

that Tiana, an animated series based on the film focusing on the eponymous character stepping into the role as a princess of a new country, will be heading to Disney+ in 2022.

"And I have tropes on the other side!"

In a last-ditch effort to keep Tiana from shattering his talisman, Dr. Facilier tries to tempt her into giving up by creating a vision of the restaurant she's always dreamed of opening, offering it to her in exchange for the talisman. But Tiana, having discovered what's truly important on her journey as a frog, throws it back in his face.

Example of:
The Final Temptation

In a last-ditch effort to keep Tiana from shattering his talisman, Dr. Facilier tries to tempt her into giving up by creating a vision of the restaurant she's always dreamed of opening, offering it to her in exchange for the talisman. But Tiana, having discovered what's truly important on her journey as a frog, throws it back in his face.