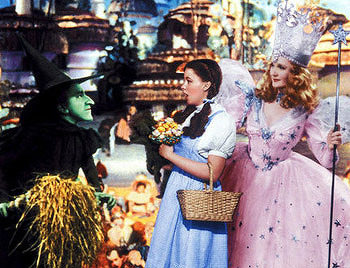 Are you a good witch, or a bad witch?
Advertisement:

In many of the original myths and legends, spirits and monsters are not explicitly said to be good or evil. Often, they're just mischievous or powerful with a weird sense of humor, and reasonable people give them lip service but otherwise leave them alone. After centuries of modifying, demonizing and adapting the stories, sometimes certain terms became associated with certain deeds. Sometimes this is a simplification to appeal to or educate young audiences, who supposedly require clear morality in characters.

A modern story can get some cred by reverting the depiction to the ambiguous original, although it's possible to annoy an audience who isn't familiar with that (or in some cases is too familiar with that). More commonly, the moral implications of the term are so indoctrinated that a story using it may invent a new piece of jargon or qualifier to imply "goodness" and "badness". For example, white witches and fairy godmothers are considered different from "bad" witches, even though they do the same things in a general sense. Mischievous creatures lumped under "elf" who are not cute tended to get eventually lumped into evil.

Naturally a fantasy story may use the same "race" for the hero and the villain, in an effort to be even-handed. Sometimes you have the weaker implication that the other group exists but the story simply doesn't follow them.

Friendly Neighborhood Vampires are different, taking a monolithically evil group from folklore and making certain members of it good. See also My Species Doth Protest Too Much.

Compare and contrast Dark Is Not Evil (the good witch may or may not look like a Wicked Witch to drive a point across), The Dark Side, Bad Powers, Good People, and Fantastic Racism.