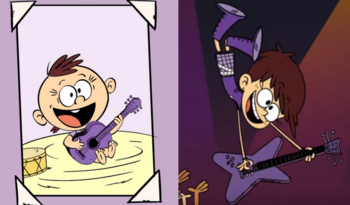 Even the color of her guitar hasn't changed in fifteen years!
Even a child is known by his doings, whether his work is pure and whether it is right.
—Proverbs 20:11
Advertisement:

Some personality traits are just phases. Others come and go, and some stick with you for your whole life. This is when a character has a personality trait that is hinted at in their infancy or early childhood (let's make eleven or twelve the age limit), normally Played for Laughs.

This could take the form of wanting to have the job that they now have when they grow up, or it could be something they actually do or say. This might be pretty straightforward (e.g. a character who's now an activist is seen holding a sign as a kid) but it might also be something that many babies or small children do, but in this case, it's a sign— for instance, a pessimist who cried a lot as a baby, or an energetic person who gave up naps early.

In these cases, the parents and/or other older characters will often dismiss it as "just a phase", which is either played as a gag to begin with since we know that it's not, or a Time Skip cuts to them much older and still doing it.

May overlap with Baby's First Words, Minor Kidroduction, Child Prodigy, Adorably Precocious Child, Spinoff Babies, Flashback to Catchphrase, Time Travel Episode (if they see what a child is like in the future or see what someone was like as a child) or Brainy Baby. Compare with Establishing Character Moment, when their early scene in a story establishes their character; that trope can overlap with this if they're first shown as a kid. Compare and contrast Childhood Brain Damage where an older character's personality is implied to be because of an injury when they were little, rather than something they naturally had since they were little. Also compare Weapon Jr. for when the gear someone uses is reflected in their younger self. Contrast Used to Be a Sweet Kid. Compare and contrast Kid Hero All Grown Up.

Henry VIII as a Child

Henry VIII as a Child