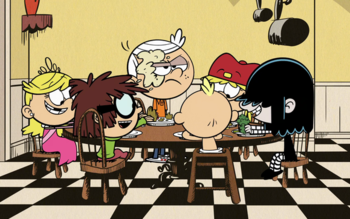 Guess who dreads this table the most.
"It's not right. My five older sisters get to sit at the grownup table with Mom and Dad, while I'm stuck here with my five younger sisters."
— Lincoln Loud, The Loud House, "A Tale of Two Tables"
Advertisement:

Most people buy furniture that is appropriate for their day to day needs. This can mean that they are unsuitable for special occasions. For example, a dining room table that is of adequate size for a family of four can be quite small for an extended family gathering, which can have a dozen or more people showing up for dinner. Since most people can't afford the expense or the space to have a table large enough for twelve when outside of a handful of times a year only four people are using it, alternative seating arrangements must be found for the guests. A common solution (at least before the advent of tables with removable inserts) is to bring out a second table (often a fold-out card table that can be left in storage when not needed) and have a subgroup of the gathering eat there. This is often referred to as the "kids' table", as a typical way of determining who eats where is to have the younger diners sit at one table and the older diners sit at the other. One extra benefit of this is that the adults can have dinnertime conversation on topics the kids would not be interested in (and vice versa).

This trope occurs when a big meal is being held (often Thanksgiving) and an older child (usually 10-16) is made to sit at the "kids' table" instead of with the adults, despite insisting that they are old enough for the latter. Bitterness and envy will ensue, especially if a slightly older peer is sitting with the adults. If they eventually do get their wish, you can expect an Aesop about how it really is better to not try to grow up too fast or something of the like.

Occasionally, the person exiled to the kids' table is an adult. Sometimes for stirring up controversy by bringing up politics or religion, other times for being single and/or childless (either by chance or by choice) in a culture that views only married adults with children as "real" adults.

An occasional amusing inversion is the kids taking the usual table and the adults getting banished to the smaller table on the grounds that the kids outnumber the grownups and need the extra space.

See Age-Appropriate Angst and Bittersweet 17. Frequently a sub-trope to Crappy Holidays. Often a source of Wangst. Also Truth in Television.