Man in the Machine 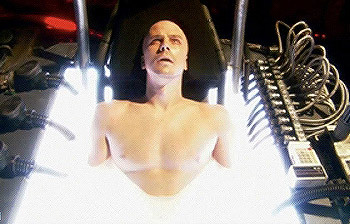 In the intersection where man and machine meet, this man has been buried in a metal mausoleum.

He isn't a typical Cyborg, lamenting his dwindling humanity, nor is he a Brain in a Jar fighting the Sense Loss Sadness and despair their Loss of Identity brings. He's a normal, ordinary human encased in a mechanical body. He might be created from a person who is fatally wounded or suffering from an illness that makes it impossible for him to survive without heavy life-support machinery. This would normally doom the person to spend the rest of his life bedridden, but if those machines were to be mounted on a robotic frame, they would be able to walk around and interact with others. Their new mechanical body will effectively be a suit of Powered Armor, immensely strong and tremendously alienating since they can't live outside of it. Is it any wonder those trapped in these bodies as an Emergency Transformation become Murderous Malfunctioning Machines?

Of course, this might be the idea to begin with. A Mad Scientist may create one by sticking some poor unfortunate soul inside his battle robot to act as the pilot. The smart Mad Scientist will usually put the test subject through Brainwashing first, though, or control the suit's inputs to make the pilot see what he wants him to see. (Alternatively, he might arrange to be hooked in himself if harm should come to him rather than using another as a test subject.)

A type of Clingy Costume. Strongly related to Mobile-Suit Human and We Can Rebuild Him. Compare Wet Ware CPU and Dark Lord on Life Support. For situations where even the biological body at the center is mostly or entirely gone, see Full-Conversion Cyborg. Contrast to People Jars, which are typically stationary installations that involve the subject being unconscious, unwillingly restrained, or otherwise unable to express autonomy, and Meat-Sack Robot, a machine given organic parts to pass for human.