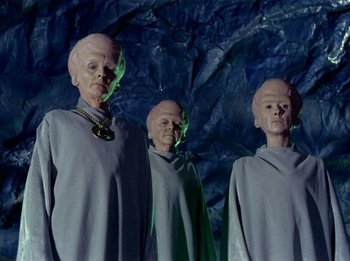 "We actually look like crustaceans, we just chose this form for your comfort. What's so humorous about the back of our heads?"
Advertisement:

When we last left our loyal-to-a-fault Vulcan and his court-martial board, it had just been revealed that the video record of the events surrounding Captain Pike on Talos IV was actually being beamed from that forbidden planet! Starfleet, enraged that Spock would be in contact with those dangerous people, ordered him locked up, Kirk relieved of command, and Commodore Jose Mendez in command of the Enterprise. We now rejoin our heroes and otherwise as they re-enter the briefing room... Ah, but first, a re-cap, of the re-cap...

[Kirk's] Personal log, Stardate 3013.1. I find it hard to believe the events of the past 24 hours or the plea of Mr. Spock standing general court-martial.

Mendez asks, "How do you plead to the charge of unlawfully taking command of this starship?"

"Of sabotaging the computers of this vessel and locking it on a course for planet Talos IV?"

[The scene shifts to the quadriplegic Fleet Captain Christopher Pike in his mobility chair.] "And of forcibly attempting to transport Captain Pike to that planet?"

Why? Why does Spock want to take to that forbidden world his former Captain, mutilated by a recent space disaster, now a shell of a man, unable to speak or move? The only answer Spock would give was on the hearing-room screen. [We see brief scenes from the previous episode and the clips of "The Cage" that were shown in it.]

How Spock could do this, he refused to explain, but there, before our eyes, actual images from 13 years ago of Captain Pike as he was when he commanded this vessel, of Spock in those days, and of how the Enterprise had become the first and only starship to visit Talos IV[...]

The summary goes on in this fashion; you get the idea.

The action picks up some hours after the scene in which Spock acknowledges that he's deliberately invited the death penalty and pleads with Kirk not to stop him from showing the record; this is shown again.

Kirk unneccessarily lays out the events, in case we didn't just see the teaser; Spock's still in deep poop, his court-martial proceeds apace and we're still seeing footage of the first pilot coming from Talos IV.

Spock, though apologetic to Mendez, reveals specifically that the Talosian Keeper has taken control of the briefing room's viewscreen, and now they have no choice but to watch. Pike indicates that he understands; as we'll discover, he's all too familiar with this being's illusionary abilities; no great surprise they could extend to technology. The transmission picks up just as Pike is awakening in the Talosians' underground cells...

After Pike and Vina run into the illusionary palace on Rigel VII pursued by the barbarian warrior (the Kaylar, as Vina called him), Spock calls Pike's deduction of still being in the cage brilliant, but notes that it couldn't help him; the Talosians could subject Pike to any stimuli that they wished, and they were about to test his ability in battle...

Apparently watching himself kill the Kaylar also killed Pike's energy level, as he's now sound asleep! Poor guy; he's had more activity in the past day and a half than he's probably had since his accident... Spock speculates, probably accurately, that the Talosians have stopped the images because they already know that Pike is fatigued. Kirk observes that this means they really care about Pike. Mendez starts up with his impatient tendencies again by demanding answers to why the Talosians want Pike back so badly, but Spock insists that the answer is so unbelievable that Mendez must see it for himself in the currently-paused transmission...

Personal log, Stardate 3013.2. Reconvening court martial of Mr. Spock... and the strangest trial evidence ever heard aboard a starship. From the mysterious planet only one hour ahead of us, the story of Captain Pike's imprisonment there...

The narrative picks up just after the Talosians disappear back into their elevator, and Pike begins to converse with Vina...

After the Talosians whisk Vina away to exact her punishment for revealing the secrets of their past and motives, Mendez, Kirk, Spock and Pike discuss the notion that Pike and Vina were abducted to serve as breeding stock, for reasons beyond being simple zoo specimens, which will be revealed...

When Pike's an Orion slave trader, we cut away again; Kirk asks present-day Pike if it's Vina as the slave girl; Pike signals Yes. Mendez notes that Orion women are said to be vicious, animal-like; that no human male can resist them. We continue to watch Vina's dancing as the break comes up...

Strange evidence from the past: how the Talosians, planning to breed a society of human slaves, tempted Captain Pike with the Earth woman they held in captivity. And as she appeared to him in many forms, each more exciting than the last, Pike was beginning to weaken...

Picking up again with the Orion slave market, Pike indeed looking as though he's about to give in to the 'narcotic' quality of illusion... but in the end he fought tooth and nail to get free.

After Pike forces the Keeper to cease his illusions and drags him out of the hole Pike cut in the transparent wall, the transmission's again turned off, and... that's it? Mendez claims the Talosians have deserted Spock, and Kirk shows equal antsiness. But Pike refuses to instantly signal a request to wait for a continuation of the transmission. Spock pleads with his old Captain, that what he's taking him back to is life, or at least a chance for life. Kirk asks what Spock is on about with his talk of life or chances for life, when all the evidence they've seen so far indicates the Talosians are about keeping specimens for a zoo or breeding stock.

But Spock insists there's more to it... but nothing is shown. Mendez asks for Pike's verdict; Pike beeps a long, perhaps conditional (but how will we know the conditions?), yes, guilty. Mendez also votes guilty as charged, and Kirk, who fights to keep his face impassive and neutral, has no choice but to do the same.

On board the bridge, Helmsman reports they've entered orbit of Talos IV, not under their own power; Spock reports that the Talosians control the ship now, and they're about to give the final piece to the puzzle...

When Pike finally steps back onto his Enterprise and she makes her departure from Talos IV, the transmission finally ends. Pike stares at the blank screen, his face as always unreadable, frozen. Kirk rises to his feet, walks to face Spock, looks at him quite approvingly. Kirk begins to plead with Mendez about Spock, but then Mendez suddenly disappears! Kirk is shocked, but again if Spock is, he shows no signs... Then, The Talosian Keeper speaks to Kirk directly, telepathically! [Re-used footage of the Keeper communicating telepathically appears on the viewscreen.]

He reveals that Commodore Mendez was yet another illusion; that he was never on the shuttlecraft or on the Enterprise! The Talosians wanted to distract Kirk with a false court-martial to prevent him using his considerable strength of will, of which they'd been informed by Spock, to regain control of the Enterprise too soon. They now openly offer Pike the chance to spend the rest of his life on Talos IV, free of the confines of his damaged body. The decision, as the Keeper notes, is Kirk's, and Pike's.

Kirk notes rather exasperatedly that even if the regulations were clear, Spock could've explained to his Captain, but Spock could not ask Kirk to face the death penalty as well. Just then, Uhura radios in with the very pleasing news that Mendez - the real Mendez, back on Starbase 11, has also received the same images from Talos IV that Kirk and Spock have been watching, and due to the historical significance of Pike and his mission, has decided to suspend General Order 7 just this once, and orders Kirk and Spock to proceed as they see fit.

Despite how jubilant he must feel that his friend and science officer is off the hook, Kirk only gives a slight smirk, looking aside to Pike, perhaps knowing what the former Captain will want to do already. He's right; he didn't need to be a Talosian to figure that out. Upon questioning, Pike beeps once; yes, he wants to go there. He asks Spock if he would like to escort Pike to the transporter room, to see him off; Pike just sits there, but if one looks closely enough, one could almost see him smiling inside, as evidenced by the "yes" beep when Spock thanks Kirk, for both of them.

Kirk has one more parting repartee with Spock, wanting to discuss his flagrant emotionalism after delivering Pike; Spock claims the suggestion insults him, that he's been completely logical about the whole affair.

The Talosian Keeper contacts Kirk again, showing him Pike, relieved of his debilitated body and young again, being led by Vina back down to the Talosians' menagerie...

"Captain Pike has an illusion, and you have reality. May you find your way as pleasant." Kirk smiles mistily as we fade off.

All tropes relating to the pilot episode itself should be placed on its page.