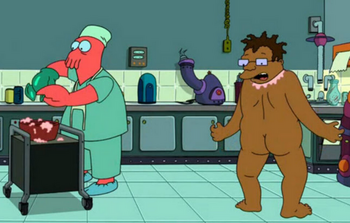 "... what are those?"
"Okay, THIS is probably where the brain goes, right?
Right?
Tenth time's the charm!"
— Dr. Circula Tori, Awful Hospital
Advertisement:

Of all the ways that First Contact can happen, you'd think that one of the happiest would be members of one species rescuing and healing a member of a different species who had a nasty accident on their territory. It establishes that the hosts are altruistic and don't want to conquer/destroy/eat the guests, and it ensures that the guest and their people should be suitably grateful. Unfortunately, there's one big pitfall.

Even if you have super-advanced healing techniques, you may not know precisely what the endpoint for an unfamiliar entity should be. OK, you can reattach all those severed bits, but how do you know which stump they were chopped off?

This trope occurs when somebody who was rescued and healed by Starfish Aliens ends up looking like a Body Horror parody of themselves because the aliens came to the wrong conclusions about what they were trying to rebuild.

Obviously, this can happen with humans attempting to heal aliens as well, and with entities of whatever sort attempting to repair machines, if the machine is fully sentient.

A particularly unfortunate version of Humans Through Alien Eyes. See also Comically Inept Healing when played for laughs. If the healer knew what they were doing but deliberately experimented For Science! or perverted fun, see Mad Doctor. If they knew what they were doing but didn't have the time or equipment to do a proper job, see Meatgrinder Surgery.