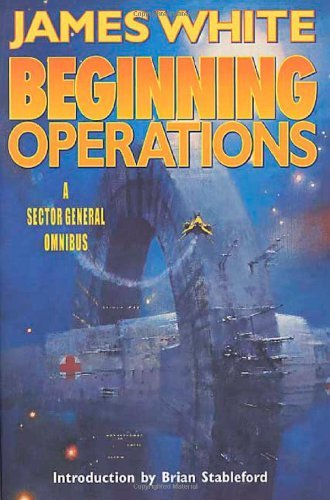 A twelve-book series by James White, about a huge hospital space station serving a sector of space populated by dozens of sentient races. White grew up in Belfast, and wished to create a Science Fiction series that did not rely on violence to provide excitement. Since "known space" is largely an oxymoron, new species are often introduced.

These are medical mystery stories, with the focus on figuring out what's wrong and what's right with a variety of fantastical patients. The first half dozen books are predominantly collections of short stories that revolve around their medical maladies, mysteries and miracles. The second half dozen are full-length novels that add fresh perspectives, such as a nurse's or a patient's, and occasionally even feature Character Development.

That Other Wiki describes the series as "a manifestation of White's pacifistic philosophy," and it certainly has a charm that extends past the actual quality of writing.

The series began in 1957 with a series of short stories published in New Worlds magazine, which transitioned to novels (starting with a collection of the five New Worlds stories as Hospital Station) that ran from 1962 to 1999. A series of omnibus editions were published beginning in 2001.

Tropes covered in this series include: