Loads and Loads of Races 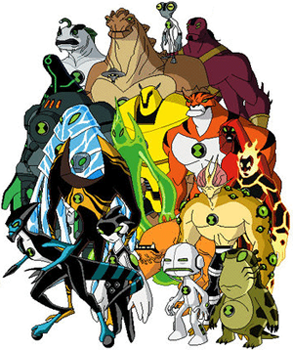 One common way of cementing the grand scale of a fantasy or science-fiction world is to include a wide variety of different sapient races. As is often the case in speculative fiction, "race" in this trope actually means species, or sub-species — we aren't talking ethnicity or skin color here. And racing is right out.

When you have 15 or more, not counting hybrids, you have Loads and Loads. Note that this trope can't be an Informed Attribute; the creator needs to give each race at least a little description, screentime, or artwork.

In science-fiction, Loads and Loads of intelligent species may be a way to distinguish planets from one another and display the diversity one might expect to see traveling across the galaxy or universe. For example, one world might be inhabited by a group of reptilian aliens while another could be full of Starfish Aliens or even Eldritch Abominations. Fantasy works might be more inclined to have Beast Men - species that are essentially humans with some added fur or scales - into their diverse world, but the fantasy and science-fiction uses of this trope tend to be fairly similar overall. (Compare Beast Fable.)

One Gender Races are not uncommon in works with Loads and Loads of Races. Some of the races included in such works may be Always Chaotic Evil or serve as Evil Counterpart Races to another group known for being more heroic. Having many different races tends to involve Hats, though highly detailed Multicultural Alien Planets can be an effective way of mixing things up.

The differences between each race also need not be incredibly large, and they might not even be entirely separate species. So long as the creator of a work makes a point of distinguishing between them in more than just culture, all of the races could be similar-looking Human Aliens.

Sometimes a race is less a biological species, and more of a mutation or modification (such as werewolves, zombies, cyborgs, vampires). Some works treat these as mere variants of whatever they used to be, but in other works they are treated, for all intents and purposes, as separate species. Compare Monster Mash.

May be a sign of a Fantasy Kitchen Sink. Compare Standard Fantasy Races, which can occasionally overlap with this trope.

When a game lets players choose their character or team from a great number of playable races, it has a Massive Race Selection instead. Note that card games do not involve "playing" a race, so their examples are listed here instead.