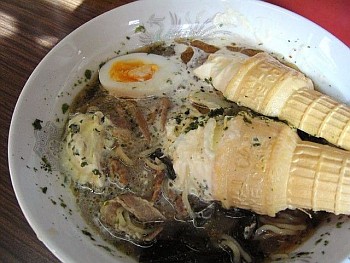 There's something in this bowl that just doesn't belong there... note No, I can't eat ice cream cones; I'm gluten-free!
"You have to try my latest treat
A jellyfish inside a beet!"
— Arthur's dad, Arthur, "Leftovers Goulash", "Arthur's Almost Live Not Real Music Festival"
Advertisement:

The Cordon Bleugh Chef is a "chef" who does know how to cook but seems to be willing to combine foods that should never be used in the same dish or, in the worst cases, even in the same universe. If the resulting dish doesn't cause an urge to purge with just the taste, finding out what was in it surely will. At the very least, many of those eating will comment that it tastes like something the dish has no right to be tasting like given its ingredients.

Some examples of disgusting dishes a Cordon Bleugh Chef might create include things like strawberry and liver pate cakes, lemon curd with ham and sardines, chocolate cod roe, parsnip brownies, fish fingers and custard, and endless other stomach-emptying recipes. Occasionally though, the combination actually turns out to taste pretty good, at least to one person out of the group.

Cordon Bleugh Chef is not about "chefs" who make food that either looks absolutely disgusting or is even harmful to the one unlucky enough to eat it; that's Lethal Chef. It also isn't when someone adjusts already-created food to make it more "appealing"; that's Bizarre Taste in Food. Though it could make them into an Angry Chef, feeling like everyone else just can't appreciate "original works of art" like he can.

Compare Foreign Queasine: foreign dishes such as haggis, deep-fried tarantulas and casu marzunote "rotten cheese", Sardinian typical soft sheep milk cheese containing live insect larvae, which ferment and melt the cheese from the inside; illegal to buy or sell in almost every part of the world. which are fairly popular in their own country but would be thought of as too disgusting to try by many people in other countries. See I Ate WHAT?! for when people don't find out what it contains till it's eaten.

Compare and contrast Overcomplicated Menu Order, which may or may not involve mixing two foods together and/or modifying it to oblivion like this trope, but coming from someone's order.

From "How To Food". Chef Jonathan Lonathan lists the few simple ingredients you'll need to make... something, he never specifies what, though given some of the things listed, it's probably best that he doesn't.

From "How To Food". Chef Jonathan Lonathan lists the few simple ingredients you'll need to make... something, he never specifies what, though given some of the things listed, it's probably best that he doesn't.