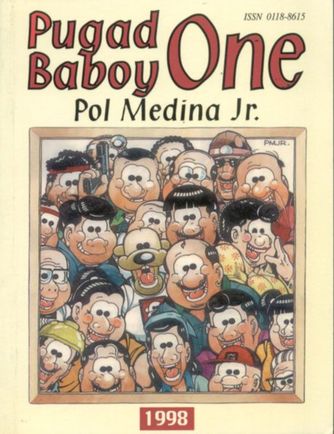 How it all started.
Advertisement:

Once Upon a Time in The '80s, a Filipino architect named Apolonio "Pol" Medina Jr. came home from the Middle East and made a comic strip, inspired partly by a friend who bought a pig farm and partly by other things from his life and work. Pugad Baboy (Filipino for "pig-nest") is a newspaper comic about the daily life and adventures of a community of fat people in a Manila suburb.

as a Webcomic for the Philippine news website Rappler. Due to the web-friendly format, it was now oriented vertically instead of horizontally, and for a time had alternate choose-your-own punchlines. It concluded on March 1, 2018 and returned to its previous newspaper format via the Inquirer's longtime rival, the Philippine Star, on March 5 2018. After one year, the comic is no longer in Star since March 9, 2019. Medina still attends local comic conventions and his Facebook page

remain active where fans can order his books from him. He still draws the comic which he posted on his personal Facebook account

It has produced merchandise, book compilations, original graphic novels, and a short-lived live-action TV comedy series in the 1990s.

While the main characters are the Sungcal family and their talking dog Polgas, it also features strips tackling Philippine society, culture, and politics. The wide scope of its humor has caused it to be compared to Doonesbury.

Pugad Baboy has examples of the following tropes: