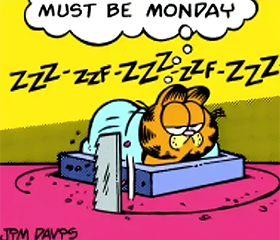 Never saw that one coming, did you?
Advertisement:

At first you hear it: a strange, rhythmic grinding noise. And then you look down and realize that there's a handsaw cutting a circle in the floorboards right beneath your feet. And of course, Rule of Funny states that by the time you notice it, you have just enough time for an Oh, Crap! take before plummeting through the newly-created hole.

A staple of classic cartoons, seldom seen in live-action unless the work is itself excessively cartoony. Fridge Logic may have you questioning how the unseen miscreant was able to pinpoint their victim's location, how a handsaw was able to cut through the various layers of insulation, plumbing pipes, electrical wiring, etc., how the saw could even find a good starting point to start sawing the hole, considering it would have to go through the solid floor firstnote this is why the viewer usually doesn't get to see the saw until the hole is already partly cut, how the floor doesn't simply flip downward before the cut is complete, and of course the fact that logically the miscreant would be at ground zero for their victim and the broken floorboards to land on.

This gag doesn't always end with the victim taking a tumble, however. Some variations include:

If this backfires on the culprit, laws of physics be damned, it's because Gravity Is a Harsh Mistress. If a character saws or otherwise cuts through the floor to make a daring escape, it's a variation of Bullethole Door. If no saw is needed because the floor is just that weak, see Floorboard Failure.

Not likely to happen in Real Life, although you may have minor paranoia when a downstairs neighbor is renovating.