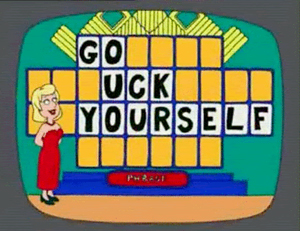 There's an F and S revealed already - the obvious answers are bluffs.note The actual answer is "Go tuck yourself in".
Whenever I feel a-[buzz]
I hold my [buzz] erect,
And whistle a happy tune,
And no-one will suspect I'm a-[buzz]
— I'm Sorry I Haven't a Clue, paraphrasing "I Whistle A Happy Tune" from The King and I
Advertisement:

When a show removes a perfectly innocuous word or words in a sentence, giving it dirty connotations. This can be done intentionally for comedy, to parody censorship, or unintentionally as a result of actual censorship.

Depending on the medium, may be used in conjunction with Narrative Profanity Filter, Symbol Swearing, Fun with Subtitles, or Saying Sound Effects Out Loud (if someone says "bleep").

Compare and contrast Signs of Disrepair, Innocent Innuendo, Accidental Innuendo. See also Cluster Bleep-Bomb, Sound-Effect Bleep, Manipulative Editing, Scunthorpe Problem, Smurfing, and T-Word Euphemism. If Played for Laughs, particularly if it makes the listener wonder just what was said, then it is often an instance of Nothing Is Funnier.