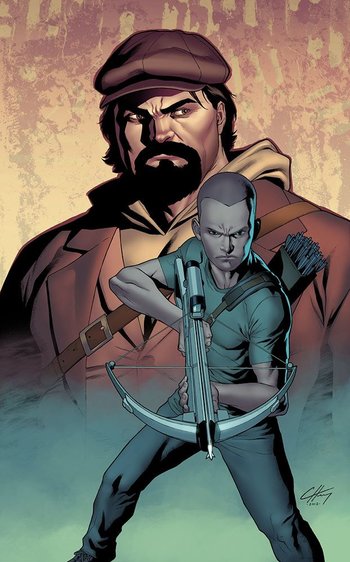 Archer & Armstrong is a Valiant Comics series created in the 90's by Jim Shooter, Bob Layton, and Barry Windsor-Smith. In 2012 Valiant began its Continuity Reboot, with this series as part of the first wave.

Millennia ago, the Anni-Padda brothers, Ivar, Aram, and Gilad, returned to the city of Ur with a strange device known as the Boon. Unfortunately, Gilad was killed in the process, so Ivar, stricken with grief and against Aram's wishes, used the Boon in hopes that it would bring his brother back. The resulting explosion not only revived Gilad, but granted the brothers immortality.

In the present day, young Obadiah Archer is given one task by his parents: to slay the demon known only as "He Who Is Not to be Named." Venturing into New York City, Archer finds his target in Aram, now a drunk vagabond calling himself "Armstrong". As they fight they are kidnapped by the 1%, a dastardly group of greedy businessmen, where Archer learns a stunning truth: not only are his parents allied with the 1%, but they are both part of a larger organization called The Sect. Teaming up together, Archer and Armstrong span the globe as they pursue a common goal: taking the Sect down.

The series lasted for 25 issues, ending on October 2014. Following The Delinquents, a miniseries featuring Quantum and Woody, they returned to the spotlight in A+A: The Adventures of Archer & Armstrong, a new series by Rafer Roberts and David Lafuente.