Been There, Shaped History 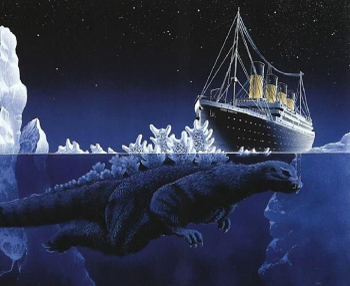 You thought it hit an iceberg? Well, now, that's just silly!
Marco: Oh, Erek, one more thing. I kind of need a makeup paper on some great figure from American history. It's kind of due day after tomorrow.
Erek: How about Franklin Roosevelt? I was the White House butler during his administration. I was the one who came up with the phrase "New Deal." Of course, it was during a poker game.
— Animorphs #34
Advertisement:

Wouldn't it be cool if a fictional character in your story was either wholly or partially responsible for a famous real-life historical event? If you're the author, you can make it happen!

Though in many cases a well-written character in their own right, this character simply cannot get around the fact that a good chunk of their screen time is being the driving force behind major events that have already been written or described by others. In effect, they are made more interesting by association due to having "guest-starred" in a suitably major event.

Oftentimes the character will be written in so that they can contribute to or take the place of whatever causes led to the real event, without radically changing that event's outcome or legacy. For example, you can have superheroes, supervillains, robots, zombies, aliens, vampires, alien vampires and whatnot play a decisive role in World War II, but the Holocaust, the invasion of Poland, the invasion of France, Pearl Harbor, the invasion of Normandy, and the defeats of Germany and Japan will still happen, just for different reasons. On the other hand, you aren't necessarily prevented from creating an Alternate History where your character does cause history to take a different path.

Supertrope to Historical Rap Sheet. Almost always the source of a Historical In-Joke. See Seemingly Profound Fool, Mistaken for Special Guest. Contrast Beethoven Was an Alien Spy where a real historical figure is given fictional adventures, and Julius Beethoven da Vinci where multiple real historical figures were actually the same long-lived or time-travelling person. Can often cross over with Noodle Incident and Real Event, Fictional Cause. May or may not involve Time Travel.

Mary Anne, an evil former godchild of Cosmo and Wanda's, is revealed to be the reason World War I happened.

Alternative Title(s): The Zelig, The Gump

Mary Anne, an evil former godchild of Cosmo and Wanda's, is revealed to be the reason World War I happened.