Literature / The League of Secret Heroes 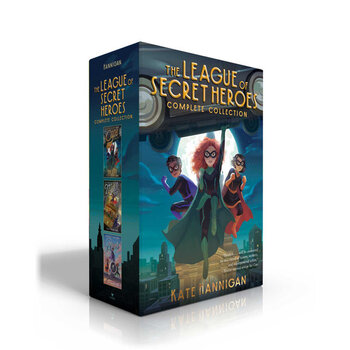 The League Of Secret Heroes is a Children's-to-Middle Graders' Superhero book series by Kate Hannigan.

The series is set in a world where Superheroes existed, and were quite famous with the public. They fought evil, they protected the innocent, and they made sure peace reigned.

Until one day, they disappeared.

No one knows what happened to them. They just stopped showing up one day. Time passed, and people seemed to forget about them. They even began to believe they never existed to begin with.

Now the world is caught up in World War II. Everyone in America has someone overseas fighting to protect their freedom, and three girls are no exception. Josie O'Malley, Mae Crumpler, and Akiko Nakano are girls who like cracking codes, eating pie, and reading superhero comics. One day, after taking a test in the Carson Building to become crackers, the place comes under attack, and they witness The Stretcher, one of the remaining heroes, disappear before their eyes, leaving behind only his costume. The three girls pick up different pieces of Stretcher's outfit, and suddenly, a spark forms between them, transforming the three into superheroines.

Now going by the team name Infinity Trinity, with each having their own name (Mae is Violet Vortex, Akiko is Orange Inferno, and Josie is Emerald Shield), under the tutelage of Constance Boudica (Mrs. B for short), the three join Room Twelve, an organization dedicated to combating the Nazi threat from the homefront, and use their powers to foil plans set up by villains.

So far, the series has two books.

The League Of Secret Heroes as a whole contains examples of: