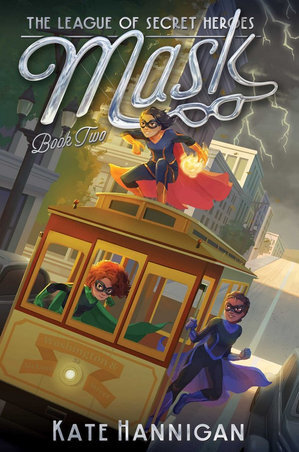 Mask is a Children-to-Middle Graders Superhero Novel by Kate Hannigan. It's the second book in The League of Secret Heroes.

Life goes on for Josie, Mae, and Akiko after saving ENIAC and its creators from the Hisser. After finding themselves in San Francisco, they discover a coded message that leads them to the bay where they do battle with a villainous clown known as Side-Splitter. Side-Splitter's power allows him to create numerous copies of himself, so he puts up quite a fight for the three.

After dealing with him, they report to Room 12, where they discover a new villainous plot is underway. Someone's been leaking information to the Japanese Military. If they don't crack the codes and discover Side-Splitter's plot, a lot of innocent people could get hurt. So, the girls offer up their code cracking skills to end this latest attack.