Film / Battles Without Honor and Humanity 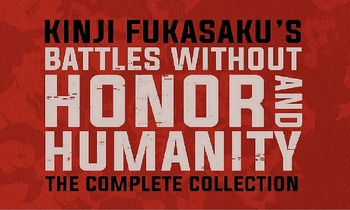 Battles Without Honor and Humanity note original Japanese title was Jingi Naki Tatakai; it was marketed, in America, as The Yakuza Papers, in Australia, as Tarnished Code of the Yakuza, in Canada as Battles Without Honour and Humanity, and elsewhere as War Without a Code is a series of films, directed by Kinji Fukasaku, director of the Japanese portion of Tora! Tora! Tora! and Battle Royale. They are set in post-war Japan, just following the end of the war. In particular, it centers on a certain former soldier, named Shozo Hirono (played by Bunta Sugawara), as he navigates the Yakuza underworld and claws his way to the top, surrounded by liars and schemers. The series is adapted from a series of newspaper articles, by journalist Kōichi Iiboshi, that were rewrites of a manuscript originally written by real-life Yakuza, Kōzō Minō, while he was in prison, giving the movies a documentary or biographical feel.

Following these films, Toei commissioned another series. These include:

In 2000 and 2003, a new duology was released, with a similar title to the second trilogy, directed by Junji Sakamoto (the first film) and Hajime Hashimoto (the second).note This where the track Battle Without Honor and Humanity from Kill Bill came from.

What is so striking about these films, is the gritty world they present, a stark contrast to period pieces that were the Yakuza films that came before. It presented a dark vision of modern Japan that influenced Japanese cinema from then on. The series was such a success, it is commonly called the "Japanese Godfather."