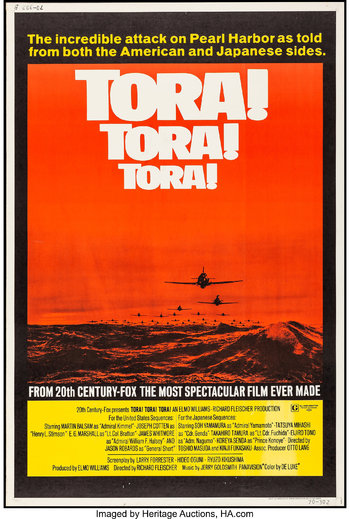 "I fear all we have done is to awaken a sleeping giant and filled him with a terrible resolve."
— Admiral Yamamoto
Advertisement:

Tora! Tora! Tora! is a 1970 film telling the story of the attack on Pearl Harbor from both the American and Japanese perspectives.

Unusually, the film was made by two almost independent units — an American unit directed by Richard Fleischer, and a Japanese unit directed by Kinji Fukasaku and Toshio Masuda.note None other than Akira Kurosawa was supposed to direct the Japanese half, and Kurosawa spent two years in pre-production, but conflicts and budget arguments between him and his American producers led to Kurosawa getting fired just two weeks into filming. This technique would be repeated with its pseudo-sequel Midway. The original idea was to blend the two stories seamlessly, until Fleischer realized it would be better to let the two halves retain contrasting styles.

The film is noted for being remarkably even-handed in an era in which American World War II movies were often gung-ho and treated the Germans/Japanese as disposable Mooks at best and Always Chaotic Evil at worst. It may have helped end that era.

It was filmed before CGI was invented. The scenes of the bombing of Pearl Harbor were among the most complex ever successfully attempted before CGI; specially modified American planes "played" Japanese aircraft, and real explosions were choreographed.

The title is the Japanese code-word used to indicate that complete surprise was achieved. "Tora" is Japanese for "tiger", although The Other Wiki mentions that it was also shorthand for "Totsugeki rageki" — meaning "surprise attack" (more appropriate given the purpose of the mission).

Not to be confused with the Depeche Mode song, which is based on the film.

In this scene, Japanese fighters, torpedo bombers, and dive bombers take off from the Japanese aircraft carrier "Akagi", ready to attack Pearl Harbor and the military airfields surrounding Oahu.

In this scene, Japanese fighters, torpedo bombers, and dive bombers take off from the Japanese aircraft carrier "Akagi", ready to attack Pearl Harbor and the military airfields surrounding Oahu.