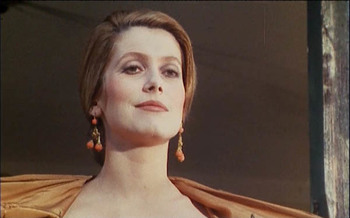 It is set in Spain in the 1920s and 1930s, shortly before Franco and the Day of the Jackboot. Tristana (Deneuve) starts the film as a 19-year-old woman who comes under the guardianship of Don Lope when her mother dies. Don Lope unfortunately has some un-fatherly ideas about young Tristana. Soon enough he has made her his lover. Tristana respected and loved Don Lope when he was a father figure, but after she becomes his lover she grows to hate him. The formerly innocent and sweet Tristana grows bitter and angry after being exploited by her guardian. Eventually, she has her revenge.