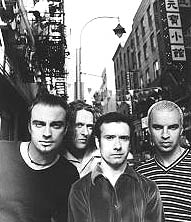 Catherine Wheel is a band, not a solo artist. Since that has been cleared up now, they formed in 1990 in the UK. The band consisted of Rob Dickinson (a paternal cousin of Bruce Dickinson from Iron Maiden), Brian Futter, Dave Hawes (replaced by Ben Ellis in 1999), and Neil Sims.

They started as one of shoegazing's pioneers, and one of the more memorable; their albums Ferment and Chrome are both considered classics and early examples of "metalgaze".

Over the years of their existence, they disliked being labeled "shoegaze" and thus shrugged it off, with Happy Days heading into more of a Hard Rock/Grunge direction and Adam and Eve being heavily influenced by art rock. Unfortunately, this led to critical reviews and commercial sales slowly dropping.

After releasing the mostly unsuccessful Wishville in 2000, the band split. Dickinson became a solo artist, Futter and Sims recorded an album under the name 50ft Monster, and Ellis joined the band Serafin.

I always thought the way you troped was neat:

Love my superstitious games, troping circles round my brain