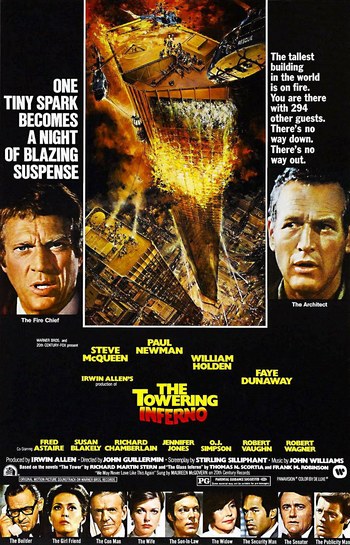 Jim Duncan: Oh, come on. Now just how bad is it?
Chief O'Hallorhan: It's a fire, mister, and all fires are bad.
Advertisement:

A 1974 Disaster Movie produced by Irwin Allen, directed by John Guillermin and featuring an All-Star Cast headed by Steve McQueen and Paul Newman.

The Towering Inferno was the first Hollywood movie to come from two major studios — it was a co-production between Warner Bros. and 20th Century Fox. The story was based on two similarly-plotted novels, The Tower and The Glass Inferno. Warner had purchased the film rights to the former, and Fox the latter; Producer Irwin Allen realized that two Dueling Movies about a skyscraper on fire would basically cannibalize the audience for both films (as would happen a couple decades later, when the aforementioned 20th Century Fox released Volcano not long after Universal released Dante's Peak, both films dealing with sudden volcano eruptions). To prevent this from happening it was decided it would be better for both studios to combine resources to make one BIG picture. (On a side note, The Glass Inferno was co-written by Thomas N. Scortia, who tends to write a lot of books about fires.)

In the film, a red-carpet party is being held in San Francisco to celebrate the opening of the world's tallest skyscraper, the 138-story Glass Tower. One of the few not celebrating is the architect, Doug Roberts (Newman), who's still upset that developer/builder Jim Duncan (William Holden) made significant changes to the design during construction in the name of saving money. He's particularly annoyed at electrical contractor Roger Simmons (Richard Chamberlain) who has shaved so much from the budget that the building's wiring is already showing signs of overload. It doesn't help that he's also Duncan's son-in-law.

Sure enough, because of the faulty wiring resulting from said cut corners, a short circuit in a janitor's closet grows into a massive fire. As the guests become trapped in the building, it falls on Fire Chief Micheal O'Hallorhan (McQueen) and the San Francisco Fire Department to help save the day.

The Towering Inferno features examples of: