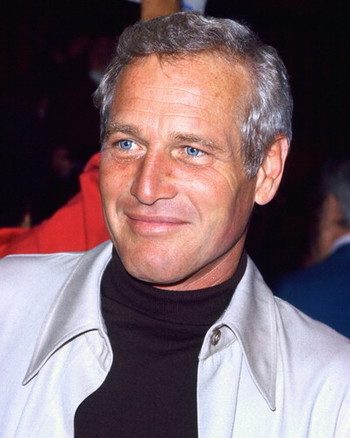 "Every time I get a script it's a matter of trying to know what I could do with it. I see colors, imagery. It has to have a smell. It's like falling in love. You can't give a reason why."
Advertisement:

One of the few stars to successfully make the transition from The Golden Age of Hollywood to the New Hollywood era of the 1960s and '70s, Newman appealed well to new generations with his rebellious persona and attractive image — he was ranked high in the "most attractive men" lists for many decades. He was especially famous for his blue eyes, so much so that he once joked that his epitaph could be: "Here lies Paul Newman who died a failure because his eyes turned brown." He starred in over 60 films, and was nominated for an Academy Award nine times, winning once in 1986. He was also the visual basis for the comic book Silver Age Green Lantern Hal Jordan.

Aside from his acting work, Newman was also well known as a professional car racer — unlike Steve McQueen, with whom he maintained a friendly offscreen rivalry, he actually raced in the 24 Hours of Le Mans and even finished second — and owner in Indy Car, and for his philanthropic work. In 1982, he co-founded the food company Newman's Own with the writer A.E. Hotchner; all of its proceeds, after taxes, were and are donated to charity via a foundation. After divorcing his first wife Jackie Witte in 1958, he married actress Joanne Woodward, and they remained together for 50 years, until his death (in Hollywood, a very remarked and rare feat on its own).

He was a friend of actor Robert Redford and did two films with him, Butch Cassidy and the Sundance Kid and The Sting.

Newman occasionally dabbled in directing, as well. His first film, 1968's Rachel, Rachel, netted four Oscar nominations. Sometimes a Great Notion (the first film ever aired on HBO when it launched in 1972), The Effect of Gamma Rays on Man-in-the-Moon Marigolds, Harry & Son, and an adaptation of The Glass Menagerie are among his other directorial credits.

For all his acting accolades, one honor he enjoyed was finding out

Newman died from lung cancer in 2008.

"When I stepped out into the bright sunlight from the darkness of the movie house, I had only two things on my mind: Paul Newman and a ride home..."